Don't believe it?  Try this.

How to foil a Nationwide Internet Shutdown

Thanks to Jeff N. who posted a link to this piece at his Facebook page and Kirby A. who emailed us the same link.

Lifehacker posts a not too complicated discussion of what the Egyptian government has done to internet connections within Egypt, and a guide for getting around it.

How to Foil a Nationwide Internet Shutdown 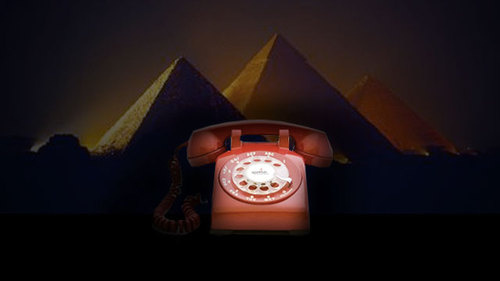 The Egyptian government cut internet connections across their country to silence protests, leaving nearly all of its citizens without online access. But they weren't entirely successful. When governments shut down broadband and mobile connections, here's what to do.

If you haven't been keeping up with the story, here's the gist. Citizens across Egypt are protesting their government in unprecedented numbers, and its believed that the internet played a major role in the protests. So what did the Egyptian government do? First, they started blocking domain name servers (DNS)—the phone book of the internet—but citizens circumvented this limitation by using proxy servers. In reaction, the government cut broadband connections to the web and forced mobile providers to do the same. For more details, read Gizmodo's take on how Egypt turned off the internet. The result: a nationwide internet blackout that's preventing Egyptian citizens from communicating online. To put it bluntly, this sucks. But it's still not good enough. We're going to look at how Egyptian citizens can (and are) circumventing the problem.

First of all, apologies to Shannara Johnson and Casey Research

who week after week are providing consistently good stuff, as I cut and pasted the entirety of the following article which was published yesterday, July 30, 2010 at Casey's Daily Dispatch

along with some other good stuff under the heading, A Rock and a Hard Place.

Secondly, apologies to you, as this one hopefully will take up a little more or your time than I usually shoot for.

As you know, when I find something I like, usually I just grab off a paragraph or two along with the heading and the byline and just link you up to the site itself.

My opinion is that about half of you follow the link.

My hope is that all of you will read this one to the end.

Remembering all the while.

Really, it isn't like I ever ask all that much from you ..... you know, the occasional comment ..... maybe ask how I'm doing before you call me a fascist moron.

Something Fishy About RightHaven Suits?

Cracking down on the blogosphere seems to have become the latest fashion. Since March, lawsuits were filed against at least 88 blogs, message boards, advocacy organizations, and other websites, according to various news reports.

And they’re all coming from the same source: Las Vegas-based RightHaven, a firm that deals with copyright infringement.

Reason.com reports that “RightHaven’s business model involves acquiring the copyrights for specific articles originally published by the Las Vegas Review-Journal, then filing lawsuits against website owners who have posted those articles without permission.”

The owners of one of the affected sites called The Armed Citizen, Clayton Cramer and David Burnett, complained to Reason magazine that they never even got a chance to remove the articles in question. “With our e-mail addresses right there on the front page [of our site], all it would have taken is an e-mail asking us to remove or alter the listing so as not to infringe,” said Burnett. “By not contacting any of the websites with a takedown notice beforehand, they’re showing they’re interested in money, not resolution.”

Which Steve Gibson, CEO of RightHaven, readily admits to. “Media companies’ assets are very much their copyrights,” he told Reason. “These companies need to understand and appreciate that those assets have value more than merely the present advertising revenues.”

With many of the targeted sites being blogs, conspiracy message boards, and government-critical websites, however, some of the victims suspect much more sinister motives behind RightHaven’s attacks. The legal trouble, they believe, may be part of a larger operation initiated by the Obama administration to silence independent, critical voices on the Internet.

And browsing the evidence, this contention may be not be all that far-fetched.

Recently, Blogetery.com, a little-known Wordpress platform, was abruptly shut down by its hosting company, BurstNet, taking down about 73,000 blogs. According to CNET, “[the] service was terminated at the request of some law enforcement agency, but [BurstNet] wouldn’t say which one. As for the reason, BurstNet hasn’t made that clear either.”

Rumors have it that the government may have gotten involved as part of anti-piracy operations, but many liberty advocates don’t buy it. And who can blame them, with frustrated sound bites coming from

President Obama himself, implying that unsympathetic bloggers may have a part in his inability to connect with the public.

In January, an obscure academic article from 2008 made the rounds in the blogosphere that had been written by Obama’s information czar, Prof. Cass Sunstein.

...we suggest a distinctive tactic for breaking up the hard core of extremists who supply conspiracy theories: cognitive infiltration of extremist groups, whereby government agents or their allies ... will undermine the crippled epistemology of those who subscribe to such theories. They do so by planting doubts about the theories and stylized facts that circulate within such groups, thereby introducing beneficial cognitive diversity.

Why should you be worried about this?

Glenn Greenwald from Salon.com explains it:

Sunstein advocates that the Government's stealth infiltration should be accomplished by sending covert agents into "chat rooms, online social networks, or even real-space groups."  He also proposes that the Government make secret payments to so-called "independent" credible voices to bolster the Government's messaging (on the ground that those who don't believe government sources will be more inclined to listen to those who appear independent while secretly acting on behalf of the Government).  This program would target those advocating false "conspiracy theories," which they define to mean: "an attempt to explain an event or practice by reference to the machinations of powerful people, who have also managed to conceal their role."

Sunstein's response to these criticisms is . . . as telling as the proposal itself.  He acknowledges that some "conspiracy theories" previously dismissed as insane and fringe have turned out to be entirely true (his examples:  the CIA really did secretly administer LSD in "mind control" experiments; the DOD really did plot the commission of terrorist acts inside the U.S. with the intent to blame Castro; the Nixon White House really did bug the DNC headquarters).  Given that history, how could it possibly be justified for the U.S. Government to institute covert programs designed to undermine anti-government "conspiracy theories," discredit government critics, and increase faith and trust in government pronouncements?  Because, says Sunstein, such powers are warranted only when wielded by truly well-intentioned government officials who want to spread The Truth and Do Good -- i.e., when used by people like Cass Sunstein and Barack Obama:

Throughout, we assume a well-motivated government that aims to eliminate conspiracy theories, or draw their poison, if and only if social welfare is improved by doing so.

But it's precisely because the Government is so often not "well-motivated" that such powers are so dangerous.  Advocating them on the ground that "we will use them well" is every authoritarian's claim.  More than anything else, this is the toxic mentality that consumes our political culture:  when our side does X, X is Good, because we're Good and are working for Good outcomes.  That was what led hordes of Bush followers to endorse the same large-government surveillance programs they long claimed to oppose, and what leads so many Obama supporters now to justify actions that they spent the last eight years opposing.

FOX’s John Stossel hit the nail on the head, quipping, “That's right. Obama's Regulation Czar is so concerned about citizens thinking the wrong way that he proposed sending government agents to ‘infiltrate’ these groups and manipulate them. This reads like an Onion article: Powerful government official proposes to combat paranoid conspiracy groups that believe the government is out to get them...by proving that they really are out to get them.”
And the RightHaven case has only fueled the fears – especially since evidence points to potentially close ties between the Obamas and Gibson.

Recently targeted by RightHaven, outraged members of the conspiracy message board godlikeproductions.com (GLP) set out to get to the bottom of the matter, digging in RightHaven CEO Steven A. Gibson’s background.

According to a resume found on the Net

, in turn, states that “In late 1988, Obama entered Harvard Law School. . . During his summers, he returned to Chicago, where he worked as a summer associate at the law firms of Sidley Austin in 1989 and Hopkins & Sutter in 1990.”

Coincidence? GLPers don’t think so, especially considering that Michelle Obama, too, is in the picture. “She met Barack Obama when they were among the few African Americans at their law firm, Sidley Austin . . . and she was assigned to mentor him as a summer associate.”

“At the firm,” the Wikipedia page goes on, “she worked on marketing and intellectual property,” the latter being Gibson’s specialty as well.

In other words, it would be reasonable to assume that Barack and Michelle Obama and Steven Gibson have known each other for 20 years and (of course this is conjecture) may even have been, or still be, friends. Making Gibson the perfect henchman, the conspiracists surmise, to carry out Obama’s death sentence on free Internet speech and open dissent.

Tall tales or the beginning of the end for a truly free Internet? We’ll see; but we will keep our eyes open to other warning signs.