Thanks to everyone who sent this story through, especially to Don D. who had the source,

Trim Tabs Investment Research, which impressed us around here to no end. 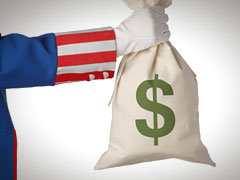 Government payouts—including Social Security,Medicare and unemployment insurance—make up more than a third of total wages and salaries of the U.S. population, a record figure that will only increase if action isn’t taken before the majority of Baby Boomers enter retirement.

So anyway, the above story reminded me about a Joni Mitchell interview Mary? had sent in a while back that I had been unable to find a place for.

It takes a couple minutes to get to the tie in, but she tells a good story, is still pretty easy to look at, and has a surprising take on the condition of American society.

Hang in there for it.

As an aside, Charlie Rose

consistently does outstanding interviews with people from everywhere.