To quote George Bernard Shaw over and over and ...

Those who cannot change their minds cannot change anything.
Democracy substitutes election by the incompetent many for appointment by the corrupt few.
People exaggerate the value of things they haven't got: everybody worships truth and unselfishness because they have no experience with them.
The liar's punishment is not in the least that he is not believed, but that he cannot believe anyone else. 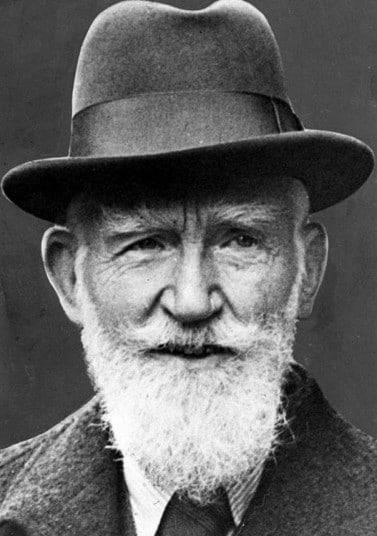 Experience fails to teach where there is no desire to learn.
I learned long ago, never to wrestle with a pig, you get dirty; and besides, the pig likes it.
In this world there is always danger for those who are afraid of it.
The trouble with her is that she lacks the power of conversation but not the power of speech.
I never resist temptation,  I have found that things that are bad for me do not tempt me.
Democracy is a device that insures we shall be governed no better than we deserve.
Most people do not pray;

they only beg.
We have not lost faith, we have transferred it from God to the medical profession.
The Jews generally give value.  They make you pay; but they deliver the goods.  In my experience the men who want something for nothing are invariably Christians.
A government that robs Peter to pay Paul can always depend on the support of Paul.
Liberty means responsibility.  That is why most men dread it.
The things most people want to know about are usually none of their business.
Hatred is the coward's revenge for being intimidated.

The lack of money is the root of all evil.

When someone signs up as a user at this site, I send out an email to thank them and explain that there is absolutely no benefit at all associated with signing in here excepting that you can now post a comment (which nobody does anyway).

Well, it seems that there is a second feature that I had not thought of in that new users get to capture my email address.

Evidently, one of you forwarded my thank you through to your mom.

And your mom (Shelly) loves it here.

So yesterday, I'm at the tail end of clearing up the debris that had piled up during a two week vacation (almost three weeks actually if you count the week spent accomplishing damn near nothing while staring blankly at my screen thinking about being gone), when I decided to cruise through my junk email box to see if something worthy might be sitting there.

I'm not going to take up your time going into all the nice things Shelly had to say about the site ... the wit, the obvious intelligence, the great writing, etc.

Although I could, having memorized the entire note.

Shelly ended her note by asking, "Why are you doing this?"

Just Thinking is where I decide what I think and what I believe.

I used to keep notebooks.

I save ideas, research, random crap that I think could amount to something someday, lists, quotes, etc.

Then, as the internet bloomed, links.

I'm sure you believe me when I tell you, "I got the links".

Just Thinking is where I try it all out.

I grind around out there until something shows up.

When something I think has a chance finally pops up, I test it.

I grind around some more and honestly try to blow it up.

The more it fits into my world view, the harder I try to blow it up.

I'm not asking anybody to believe me on that one.

If I hit the publish button, you can be certain, I'm certain.

Now, the fact of my certainty does not necessarily mean that I think I'm always right, it just means that I'm certain.

One of my very favorite features when it comes to me, has to do with the fact that if I think I'm wrong, I just change my mind, and in so doing, become right.

While all the while, remaining certain.

And thank you Shelly for your kind words.