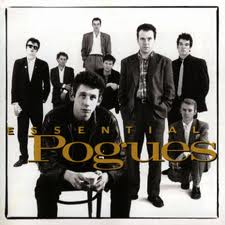 Up until the Pogues there has never been anything that even remotely resembles the Pogues, who offered up an electric mix of Punk crossed on Irish folk music.

Tonight, depending where you happen to be, you can hear any number of bands that sound a lot like the Pogues including most notably Black 47, The Dropkick Murpheys and hopefully the Pogues themselves whom I believe still soldier on.

Here they are at the absolute top of their game in 1988, live in Japan.

This is Shane MacGowan on Vocals, a seemingly bored Spider Stacey on backup vocals, Penny Whistle and cigarette, James Fearnley on the Accordian, Phil Chevron on Guitar, Andrew Rankin playing Drums, and Darryl Hunt on the Bass.  Jem Finer who you never really get to see is somewhere playing the Banjo and Terry Woods who you also never really see is on the Mandola (think big Mandolin), the headstock of which you do get to see.

If I Should Fall from Grace With God ... which I'm sure will never happen.

And because Jem Finer has moved to the saxaphone and catches a little face time on this one and even more because there are times when it's only a little Irish Punk that truly satisfies.

The fan at the front of the stage is there to keep Shane from falling on his face.