Here are two letters from the second week of April 2010.

The first from Professors Rees and Cicerone to the Financial Times in response to an editorial titled Cooler on Warming published April 5, 2010.

The second from Howard Hayden to the U. S. State Department dated April 10, 2010.

Apologies in advance for the volume of reading here as nobody hates long posts and small type more than I do.

But, it is worth the slog.

What’s happening to the climate is unprecedented

Sir, We were stimulated by your editorial “Cooler on warming” (April 5). There has undoubtedly been a shift in public and media perceptions of climate change – a consequence of, at least in part, leaked e-mails from some climate scientists and the publication of errors in the fourth Intergovernmental Panel on Climate Change report.

However, as your editorial acknowledges, neither recent controversies, nor the recent cold weather, negate the consensus among scientists: something unprecedented is now happening. The concentration of carbon dioxide in the atmosphere is rising and climate change is occurring, both due to human actions. If we continue to depend heavily on fossil fuels, by mid-century CO 2 concentrations will reach double pre-industrial levels. Straightforward physics tells us that this rise is warming the planet. Calculations demonstrate that this effect is very likely responsible for the gradual warming observed over the past 30 years and that global temperatures will continue to rise – superimposing a warming on all the other effects that make climate fluctuate. Uncertainties in the future rate of this rise, stemming largely from the “feedback” effects on water vapour and clouds, are topics of current research.

It is the responsibility of scientific organisations like ours to present the public and politicians with a balanced assessment of the evidence – and, importantly, to indicate the level of confidence and the range of uncertainties attached to them.

Our two science academies have long contributed critical, objective and open reports on climate change. We intend to draw upon the efforts of leading scientists everywhere to make our future reports more accessible and valuable and, by fostering scientific research, we hope to do a better job of reducing inherent uncertainties. We must also promote best scientific practice, especially with regard to the sharing of data. But policymakers and the public must realise that, even if scientific uncertainties could be reduced to zero, formulating effective political responses would still be controversial and challenging. Our academies will provide the scientific backdrop for the political and business leaders who must create effective policies to steer the world toward a low-carbon economy.

Ralph J Cicerone,
President of the US National Academy of Sciences

To: Department of State

Many states around the nation are trying to enact laws to restrict carbon emissions, and industries too numerous to mention have begun making changes hoping to be fully prepared to comply with laws they haven’t seen yet. Congress is considering laws in hopes that they can avoid having EPA impose its own version of CO2 restrictions.

Before jumping on this bandwagon, we should be certain that we understand the science. U.S. Climate Action Report 2010, 5th ed. might be understood by some Americans to be the definitive word; however nary a word in the report even pretends to establish a link between CO2 and putative global warming show that the increase in CO2 concentration is due to human activity instead of natural causes (such as natural warming of the oceans) show that either an increase in CO2 concentration or an increase in temperature is, on balance, bad (or worse than laws restricting CO2 emissions) or

do any science whatsoever.

Despite screams to the contrary, a vast number of scientists dispute the findings of the IPCC. Perhaps the Department of State believes that “the science is settled.” If so, please let us know which of the two dozen models—see Fig. 1 showing a slight disagreement by a factor of 3000 among the models—settled the science so that all of the others can be thrown into the dustbin of failed science and de-funded. 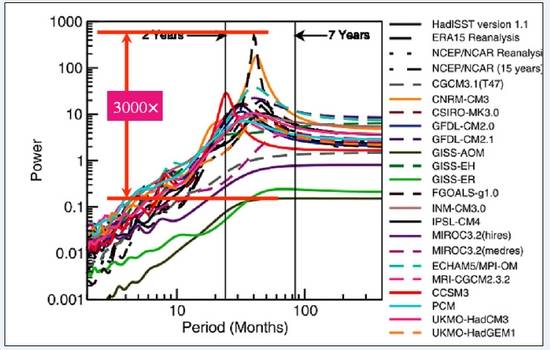 Like an ant crawling out an anthill and concluding that the world is made of 1-millimeter rocks, global-warming activists have looked at the last three-millionths of one percent of the earth’s climate history and made brash conclusions about climate, and especially their understanding of it. They wax eloquent about results from computer models. In the longer view—see Fig. 2—we see that the last million years or so are rather anomalous. The highest CO2 concentrations during the last many ice ages and interglacials are lower than at any other time for the last 300 million years. The dinosaurs lived when CO2 concentrations were 5 to 20 times as high as now. Indeed, such large creatures could not survive without the very verdant conditions afforded by adequate plant food known as carbon dioxide. 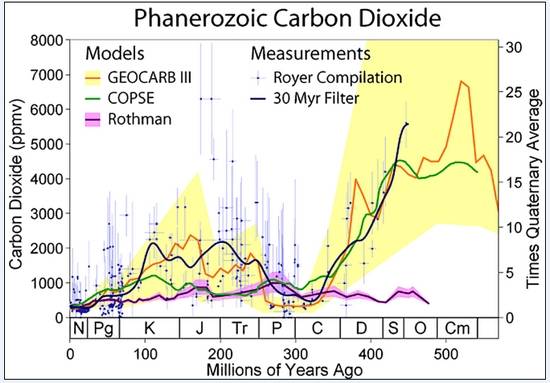 Figure 2: Carbon dioxide concentrations for the last 600 million years. Points represent actual measurements; lines represent computerized smoothings. The most recent million years is in a very narrow strip to the left of the graph, with concentrations less than 400 ppmv. The right-hand scale is in multiples of quaternary average.

That long history teaches us something else. We have all been in an auditorium when somebody was testing out the sound system and there was a sudden screech owing to a “tipping point” wherein the amplified sound at the microphone was loud enough to be picked up and made louder yet. If the people did not act immediately to cut the gain of the amplifier, and everybody just left the room and locked the door, the screech would persist forever if the power remained on. This behavior, often called “running to the rail” by electronics folks, is characteristic of all positive feedback systems. Once you reach the tipping point, there is no return. If high levels of CO2 were to cause the earth to reach a tipping point, it would have done so a long time ago, and we wouldn’t be here talking about it.

Nowhere and never, did you say? Perhaps you should consider that you have been deliberately misled.