I don't even know what to say about this one.

and Eric Spitznagel who clearly has way too much time on his hands.

Click on the photo below in the event you to have too much time on your hands.

Gregg Miller remembers the first time he realized just what an uphill battle he was facing with his new business. He was sitting backstage at the Pat Bullard Show in New York, waiting to introduce the world to Neuticles. He got into a conversation with comedian Joan Rivers, another guest on the show, and tried to explain to her exactly what he’d invented. “They’re testicular implants for pets,” he said. Rivers just stared at him blankly and asked, “What do they do?” Miller went into as much detail as he could, telling her how Neuticles help pets and their owners deal with the trauma of neutering. She just smirked at him, he says, and then repeated her question. “But what do they do?” 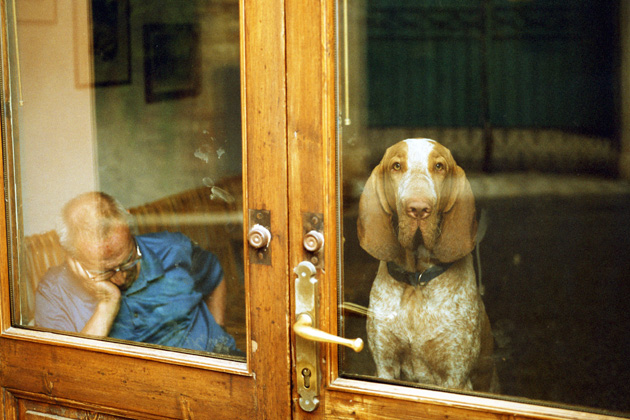 It’s difficult to quantify exactly what Neuticles do. Unlike the things they’re replacing —the actual scrotums that are removed during castration surgery—Neuticles don’t technically have a biological purpose. They’re an emotional Band-Aid for a procedure that Miller says “adds insult to injury.” He came up with the idea after noticing that his dog, a bloodhound named Buck, went through a long grieving process after being neutered. “Dogs aren’t stupid,” he says. “They would know if their eye was gouged out, or their foot was cut off. Why wouldn’t they know if their testicles are now missing?”

It’s that word—testicles—that makes his business especially difficult. It’s right there in the Neuticles name; “Neut-” stands for neutering and “-icles” for testicles. When he first launched the company, he hired a team of telemarketers to call pet owners and tell them about Neuticles. But describing the product was almost impossible without bringing up testicles. And testicles, even dog testicles, are not something most people want to discuss with a stranger who calls during dinner. It’s a subject that invariably leads to grimacing or giggling. Even Miller, who’ll be 59 years old this week, can’t avoid the puns. “When Neuticles were introduced commercially in 1995,” he says, “people thought I was nuts.”

Seventeen years later, Neuticles—still based in Miller’s hometown of Oak Grove, Mo., a suburb of Kansas City—have become a huge commercial success. Miller estimates that 517,223 neutered pets, living in all 50 states and 49 countries, are proudly (and unsuspectingly) wearing Neuticles. And they now come in a variety of styles and, yes, sizes. The less expensive option (priced from $119 to $149 for a set) is made out of rigid polypropylene and is, Miller believes, “easily detected” by discerning dogs, while the more expensive version (the UltraPLUS, which can cost up to $600) is made from silicone and, according to Miller, is “very lifelike.”

Which reminds me of my all time favorite Far Side cartoon. 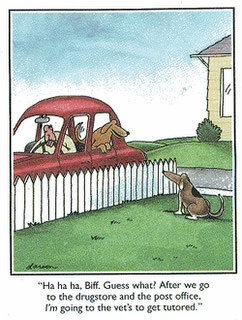