We were thoroughly impressed with Algeria's 19 year "State of Emergency".

Until we read the following article at

Algeria are newbies when it comes to this kind of thing.

Isreal doesn't have a 'State of Emergency" per se', but rather "emergency regulations" since 1945.

And the good ol' USA?

We have not one, but two "States of Emergency"

The first from the Carter Administration was put into place during the Iran hostage crisis, and subsequently renewed by every President since.

The second ... as though one weren't quite enough ... was declared by the second George Bush after September 11, 2001, and subsequently renewed by Barack Obama.

As always, click on the photo for the entire piece ... it's short.

Can't We All Just Calm Down?

Egypt has been in a continuous "state of emergency" since 1981. Are any other countries under perpetual emergency law? 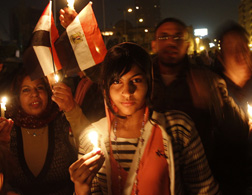 On Wednesday White House press secretary Robert Gibbs called on the Egyptian government to lift the state of emergency that it's had in place continuously since the 1981 assassination of president Anwar Sadat. Are any other countries in an ongoing state of emergency?

OK, here's my question, "So,where the hell was Robert Gibbs on this thing before the shit hit the fan?

A 19 Year State of Emergency

Here's a story from my favorite news gathering source,

Dwell on the opening paragraph for just a second.

As usual click the photo for the entire story ..... I think ..... Stratfor is a pay site, and worth the money to be sure, what is not sure is whether I can get you behind their wall.

The Implications of Lifting a State of Emergency in Algeria 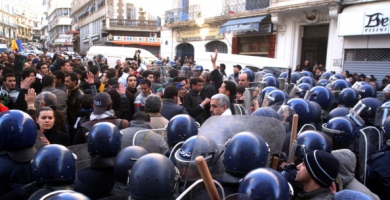 Algerian President Abdel Aziz Bouteflika announced Feb. 3 that a state of emergency in effect since 1992 would be lifted “in the very near future.” The announcement follows a series of protests that have rippled through the country since Jan. 3 against high food prices and the lack of social freedoms. By promising to end the state of the emergency, Bouteflika hopes to placate the protesters and bring the armed forces further under civilian control. While the regime appears safe for now, another rally is planned for Feb. 12 in Algiers, and the widespread protests could be used as a tool for change.

That there is one hell of an emergency.