Reading in the middle of the night again

"Just as the 'terrorist threat was used to destroy the laws that protect US civil liberty, the financial crisis has resulted in the Federal Reserve moving far outside its charter and normal operating behavior. To sum up, what has happened is that irresponsible and thoughtless--in fact, ideological--deregulation of the financial sector has caused a financial crisis that can only be managed by fraud. Civil damages might be paid, but to halt the fraud itself would mean the collapse of the financial system. Those in charge of the system would prefer the collapse to come from outside, such as from a collapse in the value of the dollar that could be blamed on foreigners, because an outside cause gives them something to blame other than themselves." - Paul Craig Roberts 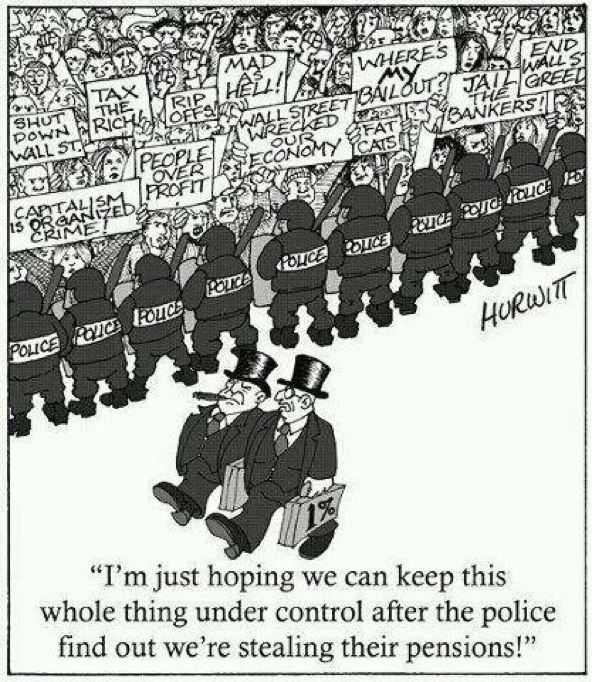 "Contrast the anti-war sentiment during the Vietnam era with how the government/media is now pulling out all the stops to create an ultra-patriotic, 'support our troops' mentality as they drive the nation to war in Iraq, Afghanistan and beyond for their own globalist conflict-creation purposes. I assure you it isn’t that these politicians have had a change of heart or repented of their betrayals. They purposely used the discouraging no-win restrictions and the resulting combat deaths of Vietnam to destroy in the minds of Americans the long-held inclination to combat communist aggression. Decades later they would rally the former anti-war media into shills for government and turn Americans into knee-jerk unthinking patriots ignorantly lending support to a totally different kind of war for empire and domination. This recent effort was started by our government’s created terror incidents and by exaggerating the war on terror in order to justify continual intervention in other nations. They poured money into millions of yellow ribbons and 'Support our Troops' bumper stickers in order to make support for troops synonymous with the rightness of wars—which was no longer true. Media lackeys constantly put forth the government line that all this money and sacrifice was for the purpose of establishing democracy in the Middle East—which wasn’t their true purpose at all. We are still fed this line today and thousands of soldiers will yet die in the falsified war(s) on terror." -  Joel Skousen, World Affairs Brief, 07-20-12

"For every wealthy entrepreneur, there are countless hundreds to thousands of individuals that tried out a new idea and failed. They risked their own capital savings and lost it. Does society owe them for their losses? Why does society get the proceeds from the successful risk takers but doesn't owe a thing to the failed risk takers? Entrepreneurial profits are a kind of risk premium. 'Society' isn't taking that risk; the individual is. So, it is the individual that should receive the reward for the risk he or she alone took." - Marc Porlier, 07-20-12

"Washington has been at war since October, 2001, when President George W. Bush concocted an excuse to order the US invasion of Afghanistan. This war took a back seat when Bush concocted another excuse to order the invasion of Iraq in 2003, a war that went on without significant success for 8 years and has left Iraq in chaos with dozens more killed and wounded every day, a new strong man in place of the illegally executed former strongman, and the likelihood of the ongoing violence becoming civil war. Upon his election, President Obama foolishly sent more troops to Afghanistan and renewed the intensity of that war, now in its eleventh year, to no successful effect.

"These two wars have been expensive. According to estimates by Joseph Stiglitz and Linda Bilmes, when all costs are counted the Iraq invasion cost US taxpayers $3 trillion dollars. Ditto for the Afghan war. In other words, the two gratuitous wars doubled the US public debt. This is the reason there is no money for Social Security, Medicare, Medicaid, food stamps, the environment, and the social safety net. Americans got nothing out of the wars, but as the war debt will never be paid off, US citizens and their descendants will have to pay interest on $6,000 billion of war debt in perpetuity.

"Not content with these wars, the Bush/Obama regime is conducting military operations in violation of international law in Pakistan, Yemen, and Africa, organized the overthrow by armed conflict of the government in Libya, is currently working to overthrow the Syrian government, and continues to marshal military forces against Iran.

"Finding the Muslim adversaries Washington created insufficient for its energies and budget, Washington has encircled Russia with military bases and has begun the encirclement of China. Washington has announced that the bulk of its naval forces will be shifted to the Pacific over the next few years, and Washington is working to re-establish its naval base in the Philippines, construct a new one on a South Korean island, acquire a naval base in Viet Nam, and air and troop bases elsewhere in Asia. In Thailand Washington is attempting to purchase with the usual bribes an air base used in the Vietnam war. There is opposition as the country does not wish to be drawn into Washington’s orchestrated conflict with China. Downplaying the real reason for the airbase, Washington, according to Thai newspapers, told the Thai government that the base was needed for 'humanitarian missions.' This didn’t fly, so Washington had NASA ask for the air base in order to conduct 'weather experiments.' Whether this ruse is sufficient cover remains to be seen. US Marines have been sent to Australia and elsewhere in Asia.

"To corral China and Russia (and Iran) is a massive undertaking for a country that is financially busted. With wars and bankster bailouts, Bush and Obama have doubled the US national debt while failing to address the disintegration of the US economy and rising hardships of US citizens.  Paul Craig Roberts 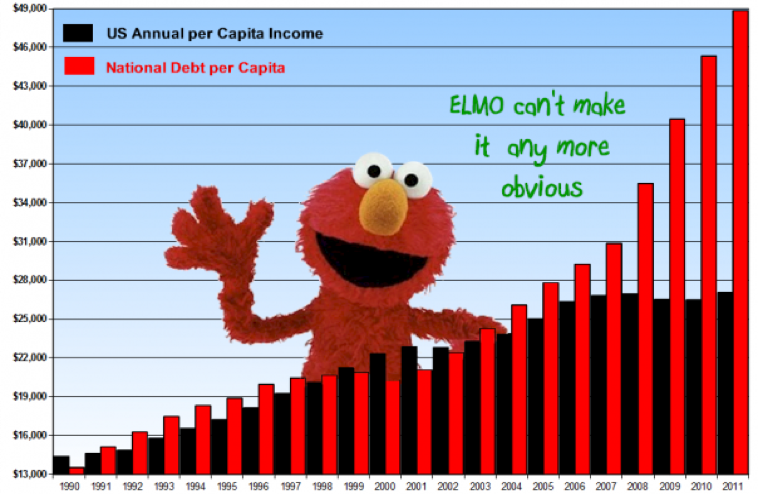 "If we look at the global economy with unclouded eyes, we reach this conclusion: 'This whole thing is about leverage.' If leverage doesn't increase, the system implodes. But since collateral is disappearing from the global economy like sand castles in a rising tide, and disposable income has stagnated, there is no foundation for more leverage.

"As a result, the State/finance cartel has only one choice: increase leverage by whatever means are left. There are only two:

2. Lower interest rates so stagnant income can leverage ever greater quantities of debt.

"The State/finance Empire and its army of academic toadies (economists) must cloak this reliance on leverage from the citizenry, lest they grasp the precariousness of the entire financial system...

"The easiest way to 'grow' is to increase leverage so more money/debt can be created. If a bank was constrained to only loaning the cash it held in deposits, that would severely limit the amount of money available in the system for purchasing villas in Spain, BMW autos manufactured in Germany, etc. If we magically enable 25-to-1 leverage, then every euro supports 25 euros in debt (mortgages, auto loans, etc.) The danger is obvious: if 1 of the 25 euros of debt goes bad, the lender has zero reserve. If 2 euros of debt go bad, the lender is insolvent.

"The only way to 'save' an over-leveraged system is to increase leverage and lower interest rates. If we claim phantom assets as real and increase leverage from 25-to-1 to 50-to-1, we have enabled a doubling of loans. All that wonderful new money will flow into the economy as spending, fueling 'growth.' This explains why the State/finance Empire in Europe keeps lowering reserve requirements for its insolvent banks. If the reserve requirement is 10%, then you need 100 million euros on deposit in cash to support 1 billion euros in loans. If you lower the reserve requirement to 1 euro, then the contents of a child's piggy bank supports 1 billion euros in debt. The other game is to claim phantom assets have market values that justify their substitution of cash...

"The key to keeping the leverage-based system afloat is to lower interest rates...once rates fall to near-zero, the leverage-income-into-more-debt machine runs off the cliff...

"...the bottom 90% leveraged their stagnant incomes into mountains of debt to compensate for their declining purchasing power. The Federal Reserve (a key player in the global State/finance Empire) has been publicly fretting over the dreaded 'debt divide,' which is Orwellian econo-speak for the bottom 90% running out of leverage. Like Wiley E. Coyote, the bottom 90% has run off the cliff and is now in looking down at the air beneath them...

"The same reliance on leverage has occurred in China, Japan, Europe and the U.S. The entire global economy's 'growth' was based on increasing leverage. That machine has soared off the cliff, and now the Empire's global army of toadies is desperately attempting to mask this reality by substituting phantom assets for actual capital. They can't do anything about lowering interest rates, though; that mechanism has already been maxed out as rates approach zero." - Charles Hugh Smith, www.OfTwoMinds.com

" Western democracy is an intellectually bankrupt concept in its current state. What we have today is regulatory democracy, an environment in which money power's corporate interests feed off the State and thus a mercantilist economy engulfs us all. Politicians are nothing more than talking mouthpieces for the elite, they are there to protect money power's interests – using force if necessary...Barack Obama said he would introduce real change when he was campaigning for the presidency. He said he would improve America's relations around the world and steward a foreign policy that would usher in peace. America would be a beacon once again to all...Obama has done nothing he said he would do to improve America's relations around the world – not that we ever actually believed he could anyway, he is just an actor..." Anthony Wilie, www.TheDailyBell.com

"Civilized people save and plan so as to take care of themselves and their families in the present and future. Fiscal conservatism and prudence is valued in a nondemocratic society, as are sound ethics. Democracy undoes the tendency for people to act cooperatively and responsibly. Politicians constantly look to appease voters with more benefits to care for them from cradle to grave, so as to win the next election. At the same time, the bureaucracy that hands out the benefits grows larger and larger and is unaccountable to anyone — especially voters...In order to distribute these benefits, the government must violate property rights. Government produces nothing; it must take from one group in order to give to another... Douglas French, The Daily Reckoning, 07-11-12 .