Nothing to do with anything

The Roanboy sent this home from college.

The Little Wiffer, now bored with her total domination of Action Potato, is presently alternating between Harvard Sailing Team vids and her relentless pursuit of world dominance on Farmville.

Boys will be Girls.

Smart Little Lena suffered a stroke and was euthanized Monday August 30, 2010 at his home in Aubrey Texas.

Arguably both the greatest show horse, and the greatest sire in the history of the National Cutting Horse Association, the tiny sorrel earned $743,275 in only eight shows.

His offspring have earned in excess of 34 million dollars in the cutting pen alone.

He has also sired champion Reining and Working Cow Horses.

I really am not crazy about the video available for Smart Little Lena at this sitting, so in order to answer the question,

"Just what the hell is a cutting horse anyway?"

The Beat aka The English Beat (in America) stood among the most popular of those bands from the "2 Tone/Punk" period of British popular music.

Along with The Clash they are easily my favorites.

This is Ranking Roger on vocals, Dave Wakeling on guitar and vocals, David Steele and Andy Cox (founding members of Fine Young Cannibals who scored international hits with Good Thing and She Drives Me Crazy) on bass and guitar, Everett Morton on drums and Saxa on sax.

From The Daily Record UK

HEROIC Scot Bill Millin, who bravely played the bagpipes as British soldiers were cut down around him during the D-Day landings, has died aged 87.

Dubbed Piper Bill, he was only 21 when his regiment - 1 Special Services Brigade - surged on to Sword Beach on June 6, 1944.

Waist-deep in the water and wading to shore under fierce resistance - wearing a kilt his father had worn during World War I - Glasgow-born Bill was among the bravest of D-Day's many heroes.

His courage was so inspirational, it featured in The Longest Day, the Oscar-winning 1962 film about the landings.

By D-Day, the Army had banned pipers from playing on the front line as they were sitting ducks for snipers.

But Bill's commander, Lord Lovat, ignored the order (gee, thank you Sir) and told his personal piper to play Highland Laddie and Road To The Isles to lift morale as his comrades fell around him.

Were it me writing the headline, it would read, "Piper Bill Millin, Legendary Crazy Bastard, Dead at 87"

With nothing but my utmost, absolute and sincerest respect.

Thanks to Cheryl who sent this one in from

At the better part of a million four hundred thousand views, maybe you've already seen it.

Forget about the crap for 3 min 28 secs.

Willy DeVille looked strung out on something (probably heroin), Louis X. Erlanger looked disgusted, and Ruben Siguenza looked embarrassed (I might have the last two reversed).

Still crabby, I bought it.

I ended up buying that record in every format ever invented.

on Just To Walk That Little Girl Home, probably my favorite ballad ever (when it's not Mixed Up Shook Up Girl, also by Willy DeVille from Cabretta).

Willy was not nearly as good at life as he was at his music.

Twenty plus years a heroin addict, he lost his second wife to suicide.

He followed that up by trying to kill himself driving off a mountain.

Spent the rest of his life walking with a cane, and performing on a stool.

He died at age 59 from Pancreatic Cancer, which outhustled the Hepatitus C. August 6, 2009.

I sincerely doubt that there ever will be.

One of the great voices in the history of popular music.

Featuring Louis Cortelezzi (I think) on saxophone and Tom Watson in a clumsy attempt to disguise himself with a ponytail, on drums.

I have spent a lot of time in my life going to the bar to see a band.

I put em right up there with The Clash.

They made two great records, a great EP, and three or four more real solid records.

They were even better live.

The Little Wiffer and I drove to see them nearly every time they got to within a hundred miles of home, a couple times I'm pretty sure we took the kids.

Just to let em see how it's done.

We were not alone, people drove all over the country to see "the boys".

Just maybe not quite enough people.

It's probably testimony to the charmed life I've led, that one of the saddest nights of my life was going to the Ark to see the boys and finding out that Gary Bennett and Jay McDowell had left the band.

They were a way great band and were even better guys.

They came out after every show I saw and hung out until everybody else had left or were kicked out, and were just plain fun to know.

One night, Donnie Herron sketched out the tunings he uses on his steel guitar for me.

I still have that napkin.

This is Chuck Mead on lead guitar and vocals, Gary Bennett on rhythm guitar and vocals, Donnie Herron "the future Governor of West (by God) Virginia" on the steel guitar (not to mention practically every other stringed instrument ever invented), "Smilin" Jay McDowell on the stand up bass ... "only 13 years old ladies and gentlemen" ... and Shaw Wilson playing drums.

Otis Spann Is The Blues!!!

I don't know by whom, where or when this was recorded, but I am thankful it was.

Dead at 40 from cancer, Otis Spann was among the greatest and most influential musicians of the twentieth century.

Having spent most of his career playing piano in Muddy Water's band, he left in 1969 for a far too short solo career.

This is the great Otis Spann.

A stalwart of the Britpop era, and in my mind one of the better singles bands ever, Supergrass never really got over in the U.S.

The band earned their first of probably 20 English top forty singles in 1995.

Their 2004 greatest hits package "Supergrass is 10" is as far as I'm concerned one of the best "Power Pop" albums ever released.

Although I'm still a little crabby about Cheapskate not being included.

This is Gaz Coombs on guitar, Mick Quinn on bass, Danny Gaffey on drums and Rob Coombs playing keyboards.

Pumping On Your Stereo and Grace.

to the 2010 FIFA World Cup Tournament.

Where i and j are the opposing sides.

“GD” is the goal difference between the two sides, “pop” = population, “y” = GDP per head and “exp” = team experience.

South Africa gets an additional 0.657 each game for home team advantage.

The above formula based on the ratio between the opposing team’s populations, GDP per person, experience and home field advantage for the host nation, Kuper and Syzmanski have applied linear regression (Huh?) to show that the outcome of international matches can be accurately predicted 72% of the time.

Click the chart below for a larger, more readable version. 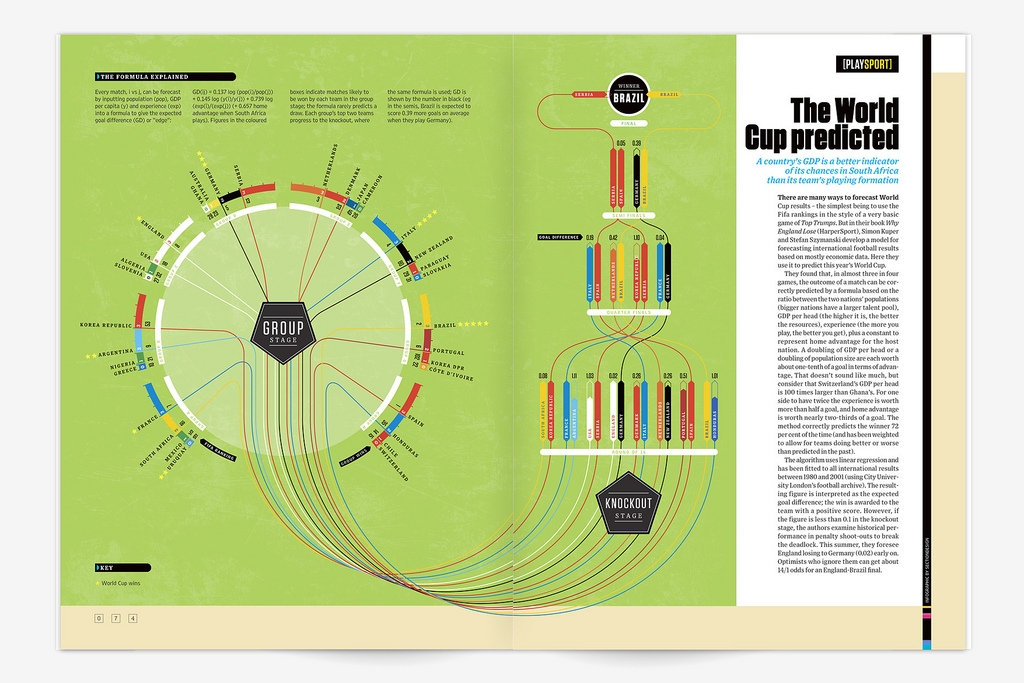 The chart was scanned from a

The favored matchup by the betting public is England v. Brazil at about 14/1.

The odds for a Serbia v. Brazil final currently stand at about 150/1.

I'm thinking about it for a hundred.

I might put another hundred on Spain, my favorite team, to win.

They play the beautiful game.

At least now we know why.