I knew in advance I'd be posting this.

I also thought I knew between two people who it was that would call and explain it to me in no uncertain terms how it is that Pearly Gates could not possibly be the most famed guitar in the history of Rock and Roll when it was indeed Brownie that sold at auction in 1999 for what was then a record price of $450,000 and Blackie that subsequently shattered and still holds the record for the highest selling guitar of all time, having also sold at auction, this time in 2004 for $959,000.

I simply left a space open just up ahead a bit in order to insert the name.

As it happened I only had it about half right as it turned out that it came via email from our good friend Richie (don't call me Dickie) V. a better than average non pro picker and a for sure Strat guy rather than a D. brother. 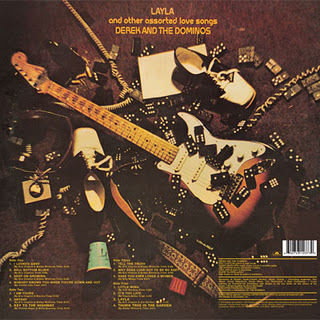 Gibson Les Pauls, as they use mostly different woods, different body types (sollid vs chambered), pickup construction/configuration, set up, the list goes on and on.

To most people they're all guitars, but to a picker (which as previously disclosed I am not) the one is nothing like the other.

And that's before you get into the charactor of individual guitars as different pieces of wood from the same tree will display differing personalities.

As mentioned in the Gibson

post, for me it's Tush that best defines that crunchy Gibson humbuckin' thing.

And it's Eric Clapton and Brownie's Layla that comes to mind when I think about that sweet, reedy Fender single coil sound.

And while I couldn't find any early 1970's Derek and the Dominoes performances of Layla, I did find this little treasure.

Live in the studio, this is Eric Clapton and Brownie along with three of the finest sidemen/hired guns in all of popular music, Bobby Whitlock on piano and vocals, Carl Radle on bass, and Jim Gordon on drums, together with Johnny Cash and the magnificently coiffed Carl Perkins.

Derek and the Dominoes.

It's Too Late and Matchbox.

To quote Eric Clapton from the book The Stratocaster Chronicles,

"My first Strat was Brownie, and I played it for years and years, a wonderful guitar. Then I was in Nashville at a store called Sho-Bud, as I recall, and they had a whole rack of old '50s Strats in the back, going second-hand. They were so out of fashion you could pick up a perfectly genuine Strat for two hundred or three hundred dollars — even less! So I bought all of them. I gave one to Steve Winwood, one to George Harrison, and one to Pete Townshend, and kept a few for myself. I liked the idea of a black body, but the black one I had was in bad condition, so I took apart the ones I kept and assembled different pieces to make Blackie, which is a hybrid, a mongrel."

Among Clapton and Blackie's hit records were were Lay Down Sally, Cocaine and I Shot the Sheriff.

Just to make things clear, Clapton recorded Layla with Brownie, but is playing it here with Blackie.

You might have missed Duane Allman, I know I did.