I was and am a Frazier guy.

Muhammad Ali may well be the greatest of all time, but Joe Frazier is the one true hero of my life.

I decided that I had something more important to do and passed on the field trip with F Troop to Cobo Hall for the closed circuit presentation of the "Thrilla in Manila".

Then I couldn't stand it and went down alone in order to get scalped at the door like you wouldn't believe.

I sat there on the edge of my seat along with the rest of the building completely astonished at the magnificent courage of these two men. 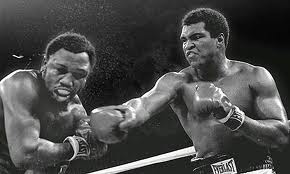 When Eddy Futch threw in the towel on the 15th round I had tears in my eyes.

I have tears in my eyes sitting here now just thinking about it some 35 years later.

People, mostly women but the occasional man as well, will sit there and tell each other, "Boxing is stupid.  Look what it did to Ali."

The UFC is stupid.

If played at the highest levels, football takes years off a life and invariably negatively impacts to a greater or lesser degree the quality of the life that remains after football.

Except ....... and what these people can't possibly even begin to understand ..... there are few things in this life that bless like having stared into the mouth of the cannon, whatever that cannon might be ..... and lived.

One of the greatest exchanges in the history of sports occured somewhere in the middle rounds of this fight as Joe Frazier having been pounded early is now up in Ali's grill doing some pounding of his own.

Ali, "Old Joe Frazier, they told me you were washed up"

"I always bring out the best in the men I fight, but Joe Frazier, I'll tell the world right now, brings out the best in me. I'm gonna tell ya, that's one helluva man, and God bless him."

Click on the photo above for the Mark Kram account of the Thrilla in Manila which is widely and rightfully acclaimed as one of the 20th century's greatest examples of sports journalism.

Seriously great writing even if you hate boxing.

post provoked in a small way the too soon to be deemed eternal (even though it will be) argument concerning which "Big Red" was the best, Man O' War

In 1999 the Associated Press assembled "a six member panel of experts" to vote on the matter.

That panel elected Man O' War "Horse of the Century" and in so doing, settled nothing.

So, I'm sitting here minding my own business yesterday when the phone rings, and Paul T. says,  "So, Man O' War or Secretariat?"

"Ok Ok, Man O' War on the strength of his

"No, No, No." he says and as expected, launches into the eight reasons why I'm wrong.

"Enough, I say, gimme the greatest horse race of all time.

Affirmed over Alydar at the Belmont Stakes?

And while we're on the subject of impossible to resolve arguments.

Which was the greatest rivalry,

Argue amonst yourselves, keep me out of this.