Coming to a screen near you ..... in both form and content.

Admit it now ... ain't that just a lot better than Lawrence O'Donnell?

California breaks into the top ten

Joining Venezuela, Argentina, and Greece among other notable bastions of fiscal responsibility, California sprints into the top ten list of likely international deadbeats with a very impressive 20% probability of default.

Can Sam be far behind?

Owning your own printing press is a good thing ... for everyone but savers. 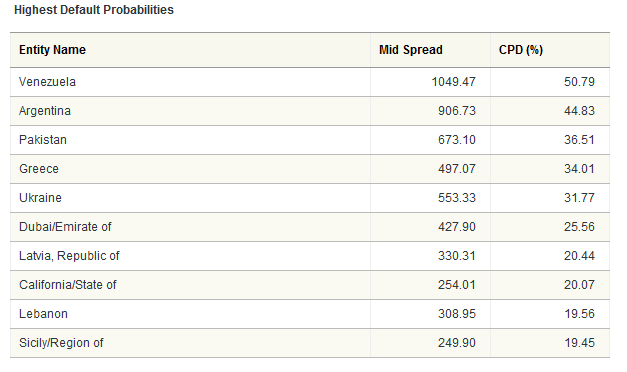 States that a countries financial reserves should equal short-term external debt (one-year or less maturity), implying a ratio of reserves-to-short term debt of 1.

The rationale here, is that countries should have enough reserves to resist a massive withdrawal of short term foreign capital.

The U.S. holds gold, oil, and foreign currencies in reserve.

The U.S. has 8,133.5 metric tonnes of gold (supposedly, ain't nobody counted it in generations).

And according to the IMF, the U.S. has $136 billion in foreign currency reserves.

So altogether... that's around $500 billion of reserves.

Within the next 12 months, the U.S. Treasury will have to refinance $2 trillion in short-term debt.

Add it up and you get $3.5 trillion ..... or so, a trillion here a trillion there, pretty soon you're talking about real money.

That would be about 30% of our entire GDP.

Where do you think that money is gonna come from?

They're gonna print it.

Or snatch your IRA.

The above was taken almost in it's entirety (with the exception of the bitter and/or sarcastic comments usually written with type just about this big) from a Porter Stansbury article that was all over the place most of this past fall.

“The inevitable coming of the sovereign debt panic finally engulfed Europe this week as the derisively (or perhaps affectionately) named PIGS spilled their slop on the continent.

But Portugal, Ireland, Greece, and Spain are hardly worthy of so much attention.

In truth, they are little more than the currently favored proxies among the leveraged speculator community (cough) for the larger problem of all sovereign debt.

Indeed, the credit default swaps on these smaller European satellite states were not alone this week in making large moves higher.

“Notable among three of the PIGS are their relatively small populations, and small contributions to either world or European GDP.

While Spain has a population over 45 million, Portugal and Greece have populations roughly equal to a US state, such as Ohio–at around 10 million.

And Ireland? The Emerald Isle has a population similar to Kentucky, at around 4 million.

While the PIGS are without question a problem for Europe, whatever problems they present for Brussels are easily matched by the looming headache for Washington that’s coming from large, US states such as California, Florida, Illinois, Ohio, and Michigan.

“My seven states of energy debt represent a full 35% of the total US population.

As with other US states, they face looming policy clashes between protected state and city workers on one hand, and the growing ranks of the private economy’s underemployed on the other.

The recent circus at the LA City Council meeting was a nice foreshadowing that the days of unlimited borrowing by governments–against future growth based on cheap energy–is coming to an end.

Washington can print up dollars and fund these states for years, if it so chooses.

But just as with the 70 million people in Portugal, Italy, Greece and Spain, the 108 million people in these seven large states are probably facing even higher levels of unemployment as austerity measures finally slam into their cashless coffers, and reduce their ability to borrow.”