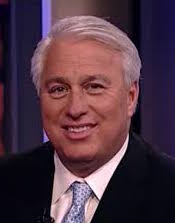 I've been going on for sometime about what I view to be the cynically dishonest calculation for the headline unemployment number, otherwise known as U3. Which number only the most blatant of our government's paid shills in the press and the most willfully ignorant of both left and right wing partisans are able to tout without cringing.

This morning we'll look into what I view to be the equally dishonest inflation numbers being offered up as factual by the Federal Government's Bureau of Labor Statics or BLS and worse yet supposedly beiing used to drive monetary policy at the Federal Reserve.

Ed Butowsky, managing partner for Chapwood Equities has developed his own method for calculating the rate of inflation and has compiled it into "The Chapwood Index".

That's Ed over there on the right.

Click on the image below for a trip to the Chapwood Index.

Here's a short history of the CPI as seen by Mr. Butowsky.

The statistic underwent another reconfiguration in 1995/96 with the Boskin Commission. These changes made the CPI an even worse indication of the real cost of living increase.

It is estimated that between 1996 and 2006, this reconfiguration of the CPI saved the US government over $680 billion.
Since then, the government has been artificially deflating the CPI to keep figures as low as possible. The readings you see published today no longer represent the real out of pocket expenditures incurred by most Americans.

The government’s baseline CPI measure excludes items such as taxes, energy, and food; which are not only necessities, but also often a majority of our daily expenditures.

"While the CPI was originally a measure to evaluate a pre-defined, consistently weighted basket of goods, over time, the basket of goods grew to an unreasonable 80,000+ items, muting dramatic price changes in common goods and services.By adding too many layers of complexity and algorithms you lose the organic, real results in a muddled mix of diluted data.

Perhaps more dangerous have been the changes in the way the CPI is calculated and consistent manipulated to keep government expenditures down and mislead the public with misinformation."

and of course, that.

Actually I read most of what BLS offers on the subject and came away from the experience with the distinct impression that on this particular subject, there is a sincere desire on the part of the Bureau of Labor Stastics to baffle with bullshit.

Anyway, I give creedence to Mr. Butowsky's method on the basis that it makes sense to me when he explains it in plain English.

The Chapwood Index reflects the true cost-of-living increase in America. Updated and released twice a year, it reports the unadjusted actual cost and price fluctuation of the top 500 items on which Americans spend their after-tax dollars in the 50 largest cities in the nation.

It exposes why middle-class Americans — salaried workers who are given routine pay hikes and retirees who depend on annual increases in their corporate pension and Social Security payments — can’t maintain their standard of living. Plainly and simply, the Index shows that their income can’t keep up with their expenses, and it explains why they increasingly have to turn to the government for entitlements to bail them out.

It’s because salary and benefit increases are pegged to the Consumer Price Index (CPI), which for more than a century has purported to reflect the fluctuation in prices for a typical “basket of goods” in American cities — but which actually hasn’t done that for more than 30 years.

The middle class has seen its purchasing power decline dramatically in the last three decades, forcing more and more people to seek entitlements when their savings are gone. And as long as pay raises and benefit increases are tied to a false CPI, this trend will continue.

The myth that the CPI represents the increase in our cost of living is why the Chapwood Index was created. What differentiates it from the CPI is simple, but critically important. The Chapwood Index:

Reports the actual price increase of the 500 items on which most Americans spend their after-tax money. No gimmicks, no alterations, no seasonal adjustments; just real prices.

Shines a spotlight on the inaccuracy of the CPI, which is destroying the economic and emotional fiber of our country.

Shows how our dependence on the CPI is killing our middle class and why citizens increasingly are depending upon government entitlement programs to bail them out.

Claims to persuade Americans to become better-educated consumers and to take control of their spending habits and personal finances.

Again, click on the spreadsheet above for some plain English regarding the increase in the cost of living across 50 or so American cities.