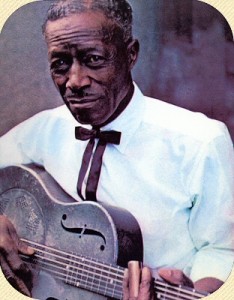 I had given Robert Johnson and subsequently Son House a listen early on in my pursuit of the song, mostly because I thought I should.  Then, satisfied that I knew what they were all about, I quickly moved on to the guys they had influenced as I was hooked on the bop that comes out of the rhythm section and thus the Chicago

thing over the far more simple and fundamental

So ... because I'm interested in whatever the the Roanboys are interested in, I sat and watched the clip of Jack White listening to Son House's Grinning In Your Face in the It Might Get Loud movie and found it to be remarkable that forty years after his death Son House remains an unfiltered influence on popular music.

If you can't hear Son House in Jack White's music, you're deaf.

So ... I started going through the video of Son House performances taken late in his life and found them to be somehow both sweet and powerful at the same time.

And to my way of thinking, simultaneous sweet and powerful is a tough one to pull off.

If indeed Robert Johnson is the "Father of Rock and Roll", meet "Grandad".

This is the great Eddie James House Jr. better known as Son House.