Bob Seger and the Last Heard 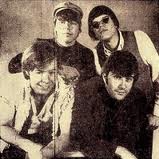 If you are a Detroiter of a certain age, you have very distinct memories of hustling home after school to catch your favorite musical group lip sync their newest hit on Detroit's version of American Bandstand, Swingin' Time hosted by WKNR then CKLW disk jockey Robin Seymour.

They were all there as all of Motowns greats appeared, Mitch Ryder and the Detroit Wheels, The Amboy Dukes, Question Mark and the Mysterians, Parliment, The Stooges and I'm pretty sure the MC5 along with most of the national acts that came through town.

Dick Clark was wishing his show was so cool.

Long before the Silver Bullet Band was even a glimmer in Bob Seger's eye there was Bob Seger and the Last Heard and then the Bob Seger System.

This is a very young Bob Seger on vocals and cheesy organ, Pep Perrine on drums, Dan Honaker on bass and I'm pretty sure that's Carl Lagassa on guitar, performing what is in my opinion one of the greatest stories in the history of Rock and Roll and Bob Seeger's first local hit record.

Bob Seger and the Last Heard.