But, now that I have your attention.

This story has been around for a couple of years or more, this is the first time I've seen it in what I consider to be a mainstream forum, The Salem News

I stumbled across the link at my friend

As always, click the photo to link up to the entire story.

Fascinating stuff, and a much easier read than any I'd seen previously, easily worth the 10 minutes.

Be smarter than all your friends.

Superstorms can also cause certain societies, cultures or whole countries to collapse. Others may go to war with each other. 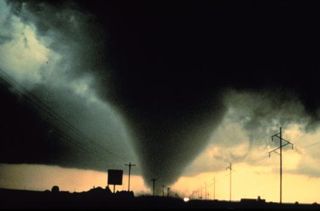 Now "it" is here: an unstoppable magnetic pole shift that has sped up and is causing life-threatening havoc with the world's weather.

Forget about global warming—man-made or natural—what drives planetary weather patterns is the climate and what drives the climate is the sun's magnetosphere and its electromagnetic interaction with a planet's own magnetic field.

When the field shifts, when it fluctuates, when it goes into flux and begins to become unstable anything can happen. And what normally happens is that all hell breaks loose.

Magnetic polar shifts have occurred many times in Earth's history. It's happening again now to every planet in the solar system including Earth.

The magnetic field drives weather to a significant degree and when that field starts migrating superstorms start erupting.