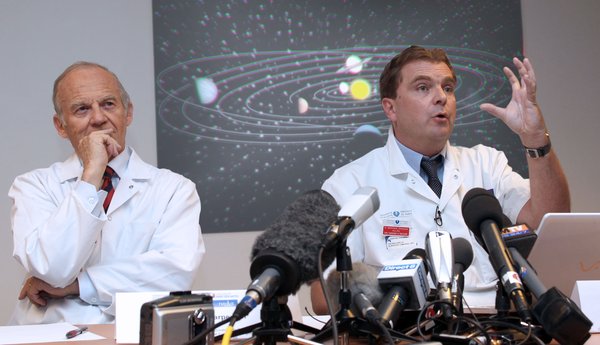 PASADENA, CA—Groundbreaking new findings announced Monday suggest the record-setting heat wave plaguing much of the United States may be due to radiation emitted from an enormous star located in the center of the solar system.

Scientists believe the star, which they have named G2V65, may in fact be the same bright yellow orb seen arcing over the sky day after day, and given its extreme heat and proximity to Earth, it is likely not only to have caused the heat wave, but to be responsible for every warm day in human history.

"Our measurements indicate the massive amount of energy this thing gives off is able to travel 93 million miles and reach our planet is as little as eight and a half minutes," said Professor Mitch Kivens, an astronomer at the California Institute of Technology. "While we can't see them, we're fairly certain these infrared rays strike Earth's surface, become trapped by the atmosphere, and just heat everything up like a great big oven."

"We originally thought that if this star wastemperatures of 100-plus in the South and Midwest, it must be at least 100 degrees itself," Kivens added. "But it turns out it's far, far hotter than that, with a surface temperature of nearly 10,900 degrees Fahrenheit."

Kivens and his CalTech colleagues said this intense radiation, which results from constant nuclear reactions converting hydrogen to helium in the star's core, could also account for why the orb in the sky is extremely bright and difficult to stare at directly.

Yes of course it's The Onion

with the best satire to be found anywhere.