Everything you need to know about the United Nations 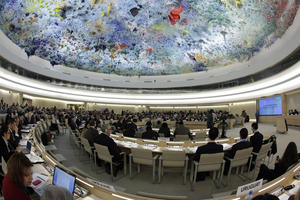 GENEVA, Feb 24 (Reuters) - Western and Latin American countries on Thursday pushed to have Libya's membership of the U.N. Human Rights Council put under challenge when the body holds an emergency meeting on Friday.

But the effort -- which falls short of demanding the strife-torn North African country's suspension from the 47-member council -- was strongly resisted by Arab and some Islamic states such as Pakistan as well as by Russia and Cuba.

OK, we have questions, "How is it possible that a country that sanctions the murder of 270 innocent people in the skies over Lockerbie Scotland, is even on something called the "Human Rights Council"?

Which brings us to our second question, "Why the United Nations?"