Levon Helm passed away today at the age of 71. 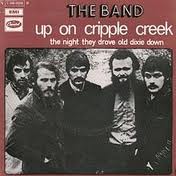 I never got to see The Band despite having tried hard three different times.

I had a couple good friends, ten or so years older than I am who got to see them perform a bunch of times all over Ontario, first backing Ronnie Hawkins and then later on as Levon and the Hawks.

I was and am incredibly envious.

Still, I've watched Last Waltz or portions of it at least a couple hundred times as it sits comfortably somewhere at or near the top of my "current pile" of music cds, books and video's, right there next to my headphone amp just about 2 feet from where I always sit, here in my office.

As it has ever since I've had this office.

From Last Waltz and their last ever performance together, this is Garth Hudson on the organ, The Band's other great voice, Richard Manuel on the piano, Rick Danko on bass guitar and vocals, Robbie Robertson on guitar and Levon Helm on drums and lead vocals.

Levon and the Hawks.

Up on Cripple Creek.