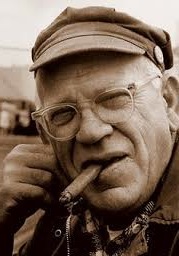 Rudeness is the weak man’s imitation of strength.

It still holds true that man is most uniquely human when he turns obstacles into opportunities.

Retribution often means that we eventually do to ourselves what we have done unto others.

We lie the loudest when we lie to ourselves.

When people are free to do as they please, they usually imitate each other.

You can discover what your enemy fears most by observing the means he uses to frighten you.

It is when power is wedded to chronic fear that it becomes formidable.

We feel free when we escape—even if it be but from the frying pan to the fire.

In a time of drastic change it is the learners who inherit the future. The learned usually find themselves equipped to live in a world that no longer exists.

Passionate hatred can give meaning and purpose to an empty life.

People who bite the hand that feeds them usually lick the boot that kicks them.”

Irrationality often manifests itself in upholding the word against the evidence of the eyes.

Every great cause begins as a movement, becomes a business, and eventually degenerates into a racket.”

It is the individual only who is timeless. Societies, cultures, and civilizations -- past and present -- are often incomprehensible to outsiders, but the individual's hungers, anxieties, dreams, and preoccupations have remained unchanged through the millennia.

Far more crucial than what we know or do not know is what we do not want to know.

A man is likely to mind his own business when it is worth minding. When it is not, he takes his mind off his own meaningless affairs by minding other people's business.

An empty head is not really empty; it is stuffed with rubbish. Hence the difficulty of forcing anything into an empty head.

You can never get enough of what you don't need to make you happy.

The greatest weariness comes from work not done.

The hardest arithmetic to master is that which enables us to count our blessings.

To quote Eric Hoffer once again.