To Quote Buckminster Fuller over and over and ...

We are called to be architects of the future, not its victims.”

There is nothing in a caterpillar that tells you it's going to be a butterfly.” 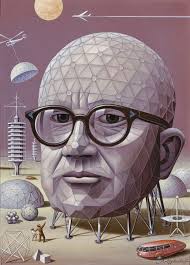 “Controlled time is our true wealth.”

“Our power is in our ability to decide.”

“Man knows so much and does so little.”

“Truth is a tendency.”

“The end move in politics is always to pick up a gun.”

“By 2000, politics will simply fade away. We will not see any political parties.”

Oopsies on that last one.

“Pollution is nothing but the resources we are not harvesting. We allow them to disperse because we've been ignorant of their value.”

“How often I found where I should be going only by setting out for somewhere else.”

A problem adequately stated is a problem well on its way to being solved.”