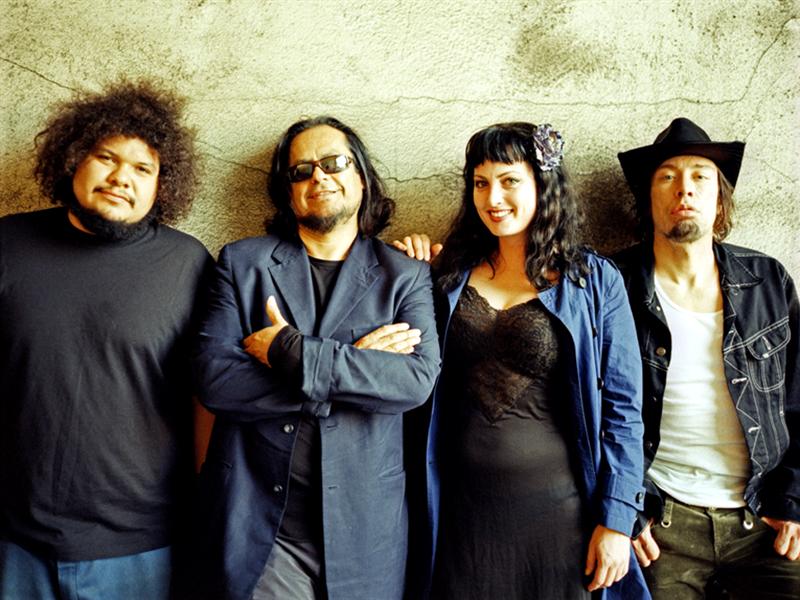 Although well known for his soundtrack work for Robert Rodriguez in his "Mariachi Trilogy"; El Mariachi, Desperado and Once Upon a Time in Mexico as well as Rodriguez and Quentin Tarrantino's After Dark, Tito Larriva and his band Tarantula have unfortunately never sold all that well in the States.

Europe is another story, as they have consistantly filled concert venues all across the continent for going on twenty years now with loyal fans of their unique blend of Blues, Goth, Tejano, ... Surf maybe ... some other stuff.

I dunno, this band is a little tough to catagorize.

Among the several versions of Tito and Tarantula that have gone out on the road, this is my favorite as I am crazy about Caroline Rippy despite my suspicion that she would likely kick my ass in a fair fight.

This is Tito Larriva on vocals and guitar.  That master of feedback, Steven Hufsteter playing lead guitar. The lovely and talented, Caroline "Lucy LaLoca" Rippy on the bass and Alfredo Ortiz playing drums.

The Strange Face of Love.

Go see em if they come to town, you won't be disappointed.