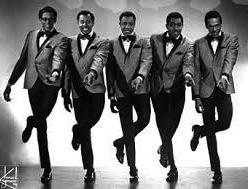 Eddie Kendricks and Paul Williams along with a revolving group of friends worked the club and talent show circuit in and around Detroit as the Primes and were well acquanted with Otis Williams, Melvin Franklin and their circle of friends who travelled the same circuit as Otis Williams and the Siberians, the El Domingos and finally the Distants which to my way of thinking are three of the very worst names in the history of popular music.

Otis Williams and Melvin Franklin, having scored an audition with Motown Records owner Barry Gordy and also having lost half of their group, partnered up with Kendricks, Paul Williams and Elbridge "Al" Bryant to sign with Motown subsidiary Miracle Records only to discover ... mercifully ... that their new name, The Elgins had already been taken by another group.

After much debate, they finally became the Temptations.

David Ruffin started hanging around their shows, jumped up on stage one night at Detroit's famed Twenty Grand Club during Shout and pretty quick Elbridge Bryant was out and the classic Temptations lineup was established.

classic, Ain't Too Proud To Beg.

Years later and after more lineup changes than I can keep track of, Eddie Kendricks and David Ruffin came back to The Temptations and The Temptations returned to Motown for the Reunion record and tours.

Here is David Ruffin, I'm thinking in 1982 or 83 despite the video claiming it to be 1987 as Ruffin was in a minimum security prison in Terra Haute, Indiana for much of 1987 for tax evasion ... just sayin' ... fronting Otis Williams, Melvin Franklin, Richard Street, Glen Edwards and Dennis Edwards ... I think ... as the Temptations.

Dead at 50 from a Cocaine overdose, David Ruffin was/is to my way of thinking the single greatest voice in the history of Soul and arguably all of popular music.