Since we're on the subject of

that begs some questions. 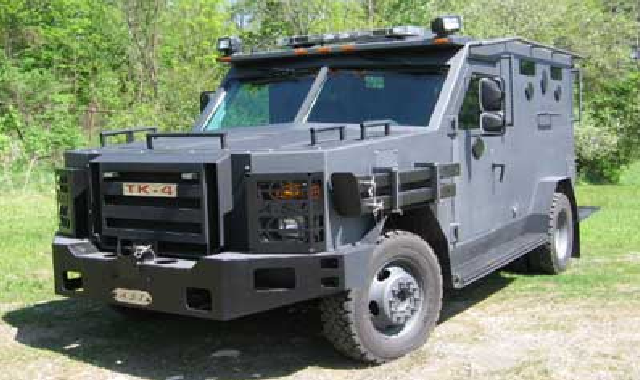 Weighing 9 tons and capable of withstanding 100-mph winds, a rescue/emergency/communications vehicle bought by the city for $175,000 is expected to provide residents with extra protection during hurricanes and other dangerous situations.

“It’s a great city and regional tool. We used it on several emergency calls here and in other cities in north county,” said Mayor David Levy.

The 20-foot-long All-Hazard Special Response Vehicle, also known as the TK-4, was used by Gardens police on a trial basis for about three weeks in July. Several other South Florida communities considering buying a TK-4 also used the vehicle, said Chris Light, president of Armored Solutions Inc., the Pittsfield, Mass.-based company that manufactures the vehicles.

The TK-4 is now back in Pittsfield where company employees are adding a winch to lift trees and other heavy debris and a night camera. The vehicle should be delivered to Gardens just after Labor Day, Light said.

Up to 10 people can fit inside the vehicle. That will give Gardens flexibility in using the TK-4 to handle different emergencies from SWAT team emergencies to lifting fallen trees, Light said.

“They can get medical, emergency and communications people all in the same vehicle,” he said. “And they can get there fast. The TK-4 can travel at highway speeds.”

So here's question number 1. How is it that supposed professional newspaper reporter, Bill DiPaolo

Which features can be easily found by simply typing TK-4 into any search engine and include among others.

The TK-4 roof hatch has armor piercing shield protection, and ASI’s exterior sniper gun port gives the team a clear view to any impending threat. A rotating turret has a 360° turning radius. The interior sniper step allows easy access to the roof.

I'm starting to want one.