Just who exactly do they intend to shoot?

This one has been flying around pretty good for the last couple of days, we think it should fly around some more. 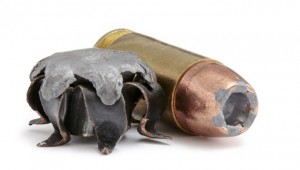 The Social Security Administration (SSA) confirms that it is

purchasing 174 thousand rounds of hollow point bullets to be delivered to 41 locations in major cities across the U.S.  No one has yet said what the purpose of these purchases is, though we are led to believe that they will be used only in an emergency to counteract and control civil unrest. Those against whom the hollow point bullets are to be used — those causing the civil unrest — must be American citizens; since the SSA has never been used overseas to help foreign countries maintain control of their citizens.

What would be the target of these 174, 000 rounds of hollow point bullets? It can’t simply be to control demonstrators or rioters. Hollow point bullets are so lethal that the Geneva Convention does not allow their use on the battle field in time of war. Hollow point bullets don’t just stop or hurt people, they penetrate the body, spread out, fragment and cause maximum damage to the body’s organs. Death often follows.

Potentially each hollow nose bullet represents a dead American. If so, why would the U.S. government want the SSA to kill 174,000 of our citizens, even during a time of civil unrest? Or is the purpose to kill 174,000 of the nation’s military and replace them with Department of Homeland Security (DHS) special security forces, forces loyal to the Administration, not to the Constitution?

All my life I’ve handled firearms. When a young boy growing up on my father’s farm in Pennsylvania Dad’s first rule of firearms training was, “Never point a gun at someone, in fun or otherwise, unless you intend to shoot them. If you shoot someone, shoot to kill.” I’ve never forgotten his admonition. It stayed with me through my Boy Scout training, when I enlisted in the army as a Private to fight in the Korea
War, during my days as a Ranger and Paratrooper and throughout my thirty-four year military career.

If this were only a one time order of ammunition, it could easily be dismissed. But there is a pattern here. The National Oceanic and Atmospheric Administration (NOAA) has ordered 46,000 rounds of hollow point ammunition. Notice that all of these purchases are for the lethal hollow nose bullets.  These bullets are not being purchased and stored for squirrel or coyote hunting. This is serious ammunition manufactured to be used for serious purposes.

In the war in Iraq, our military forces expended approximately 70 million rounds per year. In March DHS ordered 750 million rounds of hollow point ammunition. It then turned around and ordered an additional 750 million rounds of miscellaneous bullets including some that are capable of penetrating walls. This is enough ammunition to empty five rounds into the body of every living American citizen. Is this something we and the Congress should be concerned about? What’s the plan that requires so many dead Americans, even during times of civil unrest? Has Congress and the Administration vetted the plan in public.

Bearing in mind as always.