Brock Mealer walks ..... without his canes

We posted the first video in September of 2010 along with the following bit of us yammering.

We would encourage you to watch it as it will probably be the most uplifting thing you will see today.

The single greatest feature of the internet is stories like this one.

Stuff that you'd maybe see, but would forget, or that would go to some archive somewhere that you could never access again.

The truth is, that as inspirational as this story is, there are millions of people with stories this great, all over the world.

Stories that you can now access and make a part of you, on demand.

Listen for the crowd when he touches the banner.

It's a big deal to touch that banner. 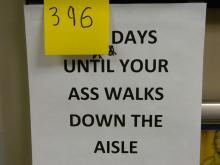 Flash forward almost two years and in the second vid Brock Mealer walks without his canes.

Spectacular ..... moreso probably if you're a Wolverine, but even if you aren't.