In about nine minutes Venus will begin it's pass between the earth and the Sun.

..... what are you doing sitting here staring at your computer screen.

If you don't have a safe way to view the Sun by all means, don't stare at the thing, that's not a good activity.

As always, click on the photo for the entire story. 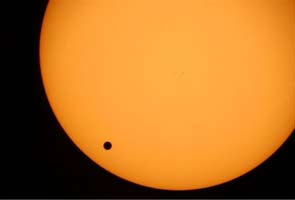 Astronomers around the world will train their telescopes on the skies Tuesday to watch Venus pass in front of the Sun, a once-in-a-lifetime event that will not be seen for another 105 years.

The nearly seven-hour passage of the planet between the Earth and the Sun will be seen as a black dot on the solar surface, but should only be viewed through approved solar filters to avoid the risk of blindness, experts warn.

On the evening of June 5, North America, Central America and the northern part of South America will get to see the start of the transit -- clear skies permitting -- beginning at 6:03 pm Eastern (2203 GMT).

All of the transit will be visible in East Asia and the Western Pacific.

Europe, the Middle East and South Asia will get to see the end stages of the eclipse as they go into sunrise on June 6.

Most of South America as well as west and southwest Africa will not get to see it except by broadcasts from other locations.