Reading in the middle of the night

Most days our serious reading begins with McMaster Online which unfortunately offers neither free content nor the occasional means to pilfer, as it is completely hidden away behind their paywall.

All three quotes below were offered within R.E. McMaster's daily newsletter.

We may well live to regret having said this, but McMaster Online is one of the three of four sites we take that we don't even ask how much it's costing us.

We would have probably stumbled across the other two quotes sooner or later anyway as we haunt both Zero Hedge and Casey's Daily Dispatch on a regular basis.

Anyway, the McMaster quote below links up to his homepage, the next two quotes will link you up to the specific piece from which it was taken.

The US is attempting to do financially to Switzerland what it did militarily to Iraq, Afghanistan and Libya, and supported clandestinely in the Arab Spring countries by Clinton.

Most people are unaware that Switzerland is the only country in Western civilization that does not have the modern rendition of the "divine right of kings", which is Hegel's "the state is god walking on earth"  top-down form of government.  Instead, the Swiss have a constitutional confederation of 26 sovereign cantons, where the governmental power lies, not in the centralized government.

The Swiss balance of power is between the three distinct different languages and cultures of the German, French and Italian speaking cantons. Moreover, the Swiss can reverse anything their central government does through a referendum system.

For a nation without any natural resources, is it any accident that the Swiss consistently express the greatest satisfaction with their lives, as well as one of the world's highest per capita incomes? Not in the least. The best politics and economics are run at the local level, not at the parasitic bureaucratic federal level. And certainly not with an empire.  R.E. McMaster

"The specific path of our lives is very much in our control. Yet most people don't give the matter much thought at all, and therefore are blown here and there like dried leaves in the wind.

And even when people do take the time to reflect on the scripts of their lives, they tend to resist plot lines that move them outside of the rut of the status quo. For instance, provided you were looking to live an interesting and fulfilling life - and who doesn't want that? - it's only logical to look to the lives of others who have lived successfully to guide in your script-making. The examples of people who have lived truly fascinating and wonderful lives are abundant in the history books, and even among contemporaries who live life large and lively. Yet most people find it impossible to envision such a life for themselves. Instead, they dismiss such people as overachievers and exceptions while resolving themselves to hunkering down in a ditch of their own making, hoping against hope to muddle through until the passage of time fills the ditch in, with them in it...

Put another way, most people cast themselves as walk-on characters even in their own lives, and not as the lead."  David Galland, Casey's Daily Dispatch, 09-23-11 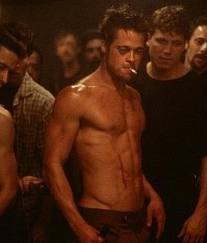 As previously disclosed, we really like Zero Hedge and especially like Tyler Durden who is really, probably 6-8 different guys all of whom would probably, really give up their left testicle to indeed look like Tyler Durden.

It is frequently a difficult read as it is not a jargon free zone.

It is also a colossal pain in the ass to subscribe to as they clearly, sincerely don't care if you subscribe or don't.

Having said that, someone from around here is hanging around there every day.

"...the transition of America from a government 'on behalf of the people' to one 'in control of the people' catalyzed, as Bill Buckler, put it simply, by one simple event: the confiscation of America's gold, and the ushering in of the welfare (or 'promise') state, the same welfare state that now is supported by a system that no matter how hard one denies, is nothing but a ponzi scheme.

...just like in the time of FDR, for whom the creation of a 'mild' inflation was a prime prerogative to offset the depressionary deflation gripping the land, the moment for a brazen gold revaluation by none other than the US government has arrived. Unfortunately, it likely also means that any scheme in which the government opens a buy/sell gold window at a substantially higher price point, will mean that very soon, either by guile or by force, the US government will once again be the prime and sole owner of all the gold.

As Coxe says, 'The gold bugs have long proclaimed their own version of the Golden Rule: “He who has the gold makes the rules." By that standard, Barack Obama could become the leader of the world overnight.'... in summary, Coxe's point is that the time for a government 'LBO' of the gold market, one in which every last ounce is extracted from the skittish public, in exchange for pseudo-equivalent assets such as gold-backed bonds, has arrived. The only question is what the acquisition price of the risk-free alternative to fiat would be, and hence how much higher will investors push the price in anticipation of the inevitable 25% take out premium. Once the public realizes that this is the endgame, and that the buyer of only resort will be none other than Uncle Sam... then look out above.

As for the context of Executive Order 6102.2, Coxe notes: 'When nearly all OECD economies are running huge deficits at a time of near-zero interest rates, and nearly all governments are looking for ways to raise revenues without imposing economy-unfriendly taxes, why don't the big holders revalue their gold to, say, $2,200 an ounce and declare themselves willing sellers at that price—in bars or in bonds backed by gold—and willing buyers at, say, $2,000? Roosevelt revalued gold from $20.67 an ounce to $35 and declared that the US was a buyer and seller at that price. He also made it illegal for US citizens to own gold. By the end of the Depression, most of the world's visible gold reserves were in Fort Knox.'

Most importantly, Coxe observes that 'now is a good time to lock in the gold bull market by monetizing the nation's holdings through various strategies and vehicles forty years after Nixon uncapped gold and 78 years after Roosevelt boosted it 70%. Why don't the governments bring out their gold and use it to back their bonds? Obama should, in our view, try to find one non-Keynesian economist who understands gold to advise him. We’re sure he could get an old-fashioned scholar from the University of Chicago to help him out if he made a few calls.'" - Tyler Durden, www.ZeroHedge.com, 09-22-11

Most people aren't aware of the fact that I used to look a great deal like Tyler Durden ... before the operation.