Prodded by Mitch Albom, Jeff Daniels, and Mike Binder among others, the state of Michigan under the Granholm administration, passed a program offering tax credits to the entertaiment industry in an effort to induce producers to do business creating product in the state of Michigan.

Minimum spend of at least $50,000 in Michigan to be eligible.

40% refundable tax credit, across the board on Michigan expenditures.

Claim an extra 2% if filming in one of the 136 Core Communities in Michigan (click the link to download and print a map of the core communities).

$2 million salary cap per employee per production. There is no other cap and no sunset.

All applicants can expect a 4 week review process once all materials have been received.

Must spend at least $500,000 annually in Michigan to be eligible for an interactive web site project.

By anyone's standard, the program has been a success at bringing projects to the state of Michigan.

Among the "feature films" shot in the state of Michigan are Clint Eastwood's Gran Torino, Michael Moore's Capitalism, a Love Strory , and Up in the Air starring George Clooney (which by the way, I really, really liked) among others.

George Clooney is back in town as I type this, working on something.

Michigan's new governor, Rick Snyder has proposed a drastic reduction in the total amount available for this tax credit program and in so doing has raised the ire of Mitch Albom among others who correctly (I think) contend that movie productions and jobs won't come to Michigan without favored tax treatment.

The below is a chart from the St. Louis Federal Reserve Bank which demonstrates Michigan's loss of some 400,000 manufacturing jobs during the first decade of the 21st century. 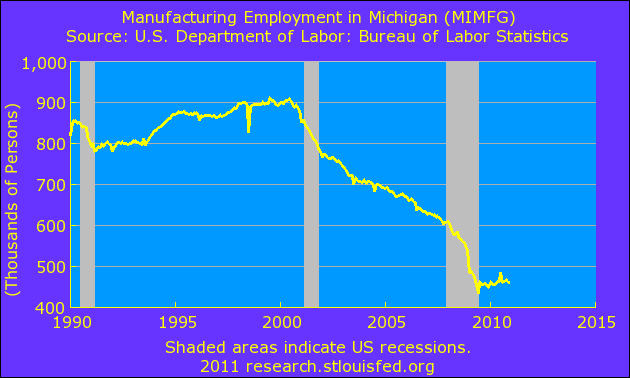 Ok, so here's my question.

To my knowledge, which I will admit to being incomplete on this issue, Mitch Albom, Jeff Daniels, Mike Binder and Michael Moore have never advocated for anything approaching a 40+% "across the board tax credit on all Michigan expenditures" for anyone other than themselves via their industry.

If this idea is working so well when it comes to the movie business, why wouldn't it work equally well attracting business in industries where all the infrastructure, buildings, equipment and a trained up and highly skilled labor force, in other words the whole enchilada ..... IS ALREADY IN PLACE?

Why aren't these guys advocating this kind of a program for everyone?