The Secretariat movie comes out today.

Efforts to promote the movie included broadcasting the Sports Century feature about Secretariat on one of the ESPNs last night.

I sat there every bit as mesmerized as I did on the Saturday afternoons those races were held.

Most people of a certain age can tell you exactly where they were when they heard about the JFK assassination.

But I can also not only tell you where I was for all three of Secretariat's Triple Crown victories, I can tell you what I was eating.

There are only two kinds of people on this earth.

Them that need a horse, and them that don't.

I comfortably fall into that first category.

Throughout most of my life, when I had a dollar to give, I'd give it for a horse.

Which is how it is that I am in possession of the following wealth of mostly useless information I am about to share with you now.

Despite the fact that it only sort of reveals the kindness, intelligence and size of Secretariat's eye, the following cover of The Blood-Horse Magazine, is my favorite profile photo of Secretariat. 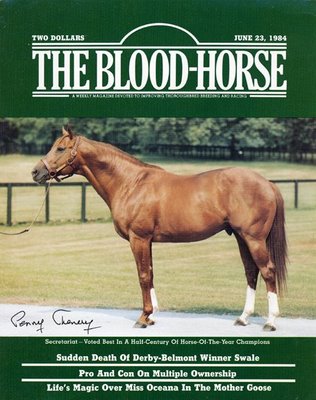 I like this photo because the flat surface he's standing on allows you to see just exactly how the horse was made.

Having been a faux cowboy my entire life, I like my Thoroughbreds

And this one does.

He's a little downhill, the top of his hip is maybe a half inch taller than his withers (behind the neck).

While you wish he went the other way, it ain't tragic.

, but now you're getting greedy.

Look at the depth at his throatlatch and think about all that room for a windpipe.

Look up from the front hoof and up, past what you're likely to think of as the ankle.  That's the canon bone, the shorter and stronger that bone is, the better it is for soundness.

His are ridiculous in their shortness.

Look up from the hoof and past the ankle on his hind leg.

Those are hocks, and again, the shorter the better, and despite the fact that they didn't stand him up straight behind for this shot, you can see them running just a hair up under him and into the ground (providing leverage) just the way you want them.

Keep looking up the hind leg at that football he had for a gaskin.

Look at the power in his hip and stifle (butt).

It is no wonder he could just blow your doors off accelerating.

But, while helpful, none of that stuff explains the greatness of Secretariat.

Secretariat like many equine champions, was known in life as a horse with "heart".

Upon his death, he was autopsied at the University of Kentucky by Dr. Thomas Swerczek,

In Dr. Swerczek's own words within a correspondence to

"Certainly, after performing autopsies on several thousand thoroughbred horses, including mares and stallions, no other horse came close to Secretariat’s heart size.

The second largest heart I found was the heart of

The third largest heart I found was stallion Key to the Mint, which was 16 pounds. The majority of all others were smaller, in the range of 10 to 12 pounds. Bold Ruler, the sire of Secretariat had an average size heart.

The heart size seemingly is inherited from the female side of the pedigree. When I performed the autopsy on Secretariat, which was necessary because of insurance and we needed to determine the cause of the laminitis, the cause of destruction, I did a cosmetic autopsy. The reason being I did not want to dismantle such a remarkable specimen and the farm personnel and handlers were present to immediately collect all organs in large plastic bags which were immediately returned to the farm to be buried with the body.

Normally, with other horses we can keep all organs and the body for further study, or to preserve large specimens, like the heart, but I was not allowed to do this with Secretariat. For this reason, all specimens were immediately collected and returned to the farm, and I did not get a chance to weigh the heart.

However, by comparing it to numerous other hearts I got actual weights on, I am certain the weight was between 21 to 22 pounds. So I considered the heart weight officially as 21 pounds. The heart was in perfect shape, not diseased in any way, but just considerably larger than any other horses I autopsied."