I don't even know what to think about this one.

This six page article takes some time to read but could hardly be more ........... something. 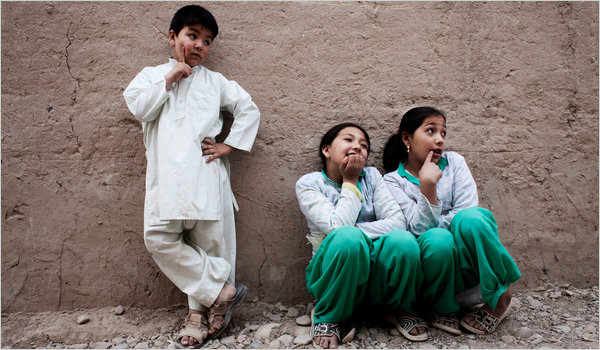 Mehran Rafaat, 6, left, and her twin sisters, Benafsha, center and Beheshta, near their home in Badghis Province, Afghanistan

KABUL, Afghanistan — Six-year-old Mehran Rafaat is like many girls her age. She likes to be the center of attention. She is often frustrated when things do not go her way. Like her three older sisters, she is eager to discover the world outside the family’s apartment in their middle-class neighborhood of Kabul.

But when their mother, Azita Rafaat, a member of Parliament, dresses the children for school in the morning, there is one important difference. Mehran’s sisters put on black dresses and head scarves, tied tightly over their ponytails. For Mehran, it’s green pants, a white shirt and a necktie, then a pat from her mother over her spiky, short black hair. After that, her daughter is out the door — as an Afghan boy.

There are no statistics about how many Afghan girls masquerade as boys. But when asked, Afghans of several generations can often tell a story of a female relative, friend, neighbor or co-worker who grew up disguised as a boy. To those who know, these children are often referred to as neither “daughter” nor “son” in conversation, but as “bacha posh,” which literally means “dressed up as a boy” in Dari.