When what I should have been doing was reading Richard Russell.

Along with Harry Schultz and Joe Granville he clearly is one of the grand old men of the financial newsletter business.

Despite the fact that Mr. Russell is now 86 and significantly less hail than he used to be, I just dropped another $175 for a 6 month subscription to his newsletter, the Dow Theory Letter, despite the disclaimer at the bottom of the offering that reads something to the effect that, "You know Richard is 86 years old, Right?  Ain't gonna be no refund.

If it goes just one week, it will have been cheap at twice the price.

The chart below is for DBC, the commodity tracking index offered on the New York Stock exchange.

Richard pulls out some of the items that make up that index immediately below.

With the following commentary

"Trouble -- The poverty sector and the middle class are having trouble enough, but the chart below spells more pain. This is the Commodity chart, and it's telling us that the price of food is heading skyward. With the price of food (corn, grains) heading higher and with oil now over 83, the squeeze is on for the majority of Americans.

The US is floating in liquidity. And nobody knows what to do with it. Which is one reason why stocks have been floating higher. Should you buy farm land, housing, commodities, silver, bonds, gold, insurance, what? There's no safe return on anything."

Around 1999 and 2000 gold was selling at just above 260 an ounce. But more important, many well-known gold shares were selling like second-hand rain coats. These formerly much-loved gold shares were selling at such low or bargain prices that I thought one could buy thousands of shares and just "put 'em away" and forget about them. I knew gold wasn't going out of style, and it was just a matter of time before interest in gold returned, as it has in all history.

Great bull markets start with stocks selling "below known values." That's where gold mining shares were selling around 1999 and 2000. I equated gold shares in the year 2000 with the Dow in June 1999 at a time when the Dow was priced at 161. In the year 2000, I thought to myself, "Could this be the very beginning of a great bull market in gold, a bull market that could ultimately take gold above its January 1980 peak price of 850? That idea stuck in my head; in fact I became obsessed with the idea that a great bull market was beginning and very few people even suspected that was happening in gold.

In fact, I was so sure of my stand that I wrote an article that was published in Barron's (December, 1958) in which I made the case for a coming final boom phase in the stock market. That article drew a great amount of interest, and it put me in business. A speculative third phase did appear in the stock market during 1956 through the early '60s.

Today I am taking the same stand regarding the gold bull market. The gold bull market will not end with a fizzle and a whimper. It will end with intense speculation and widespread interest from the funds and the public. We haven't seen that kind of activity yet, but I'm convinced that a period of wild speculation in gold lies somewhere ahead.

This is why I continue to beg my subscribers to load up with gold. As I see it, we are nearing a period of intense speculation that will be beyond anything seen before by the last three generations of Americans. Ironically, more money made in the final explosion in gold than was made during the first two phases combined.

Great bull market are seen maybe once or twice in a lifetime. The current "stealth" gold bull market has sneaked up on most Americans. The very phrase, "gold bull market" is sneered at by most analysts today. In fact, most of the comments on gold today come in the form of warnings; "Gold is too high." "Gold is in a bubble." "Gold will sink back below 1000." "Gold is a fool's play."

Nonsense. Gold is moving ever-closer to it's climactic speculative third phase. The negative comments about gold will only serve to make the gold bull market that much stronger. In this business, there is nothing more powerful than a primary bull market that has been denigrated, spat at, and held back for years.

And that's the end of my "lecture" about the fabulous gold bull market.

Below, the profile of one of history's greatest primary bull markets (and it's not finished yet).

Either chart will link you up to Richard Russell's fine site.

"Meltdown" provides the clearest explanation I've read of the events that caused the various "bubbles" we have endured over the past 10 years.

"Asset bubbles, like the housing bubble we’ve just lived through, do not occur spontaneously. If people bought lots of houses on the free market, interest rates would rise as the banks’ loanable funds were depleted. That would put an end to speculation in real estate.

But thanks to the Federal Reserve System (or simply the 'Fed'), which is no part of the free market, large infusions of money created out of thin air kept interest rates low, and thus perpetuated the bubble. During an asset bubble, demand for the asset in question rises, as does its price. Where would people get the money to keep buying an increasingly costly asset if the government’s officially approved money machine weren’t there to flood the economy with cash?

It was this interference with interest rates, pushing them well below where the free market would have set them, that set in motion the classic boom-bust cycle we’ve just witnessed. F.A. Hayek won the Nobel Prize for showing how central banks like the Federal Reserve, by interfering with interest rates and not allowing them to tell entrepreneurs the truth about economic conditions, divert the economy into unsustainable configurations that inevitably come undone in a crash. (Hayek belongs to a tradition of free-market thought called the of economics.)

Adding fuel to the fire was the so-called Greenspan put, the unofficial policy of the Greenspan Fed that promised assistance to private firms in the event of risky investments gone bad. What kind of incentives do you suppose that created?"

Sort of makes you want to wonder which asshole has been controlling the damn thing around here lately.

A One Hundred Trillion Dollar Bill

Evidently, the One Hundred Trillion Dollar note you see below is/was real.

At least in the sense that some moron at the Reserve Bank of Zimbabwe viewed it as currency.

Jeff Harding in a very well done piece, claims it was purchased for $7.50 on Ebay.

Click on the One Hundred Trillion Dollar note for the story. 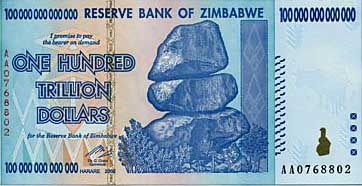 I don't know about you, but I find it troubling that the morons running our federal government are beginning to compare so favorably with your basic Zimbabwean government morons.

As an aside, I was unable to open either the official government web site

I couldn't decide if that was a good thing, or a bad thing.

The US Mint is suspended its production of 1 oz. gold eagle and gold buffalo coins three times in 2009

Over the last decade the DJIA is down about 80% against gold.

Click anywhere below to link up to the entire piece.

“The supply of gold increases at a far slower rate than that of paper money. Each year, the gold mining industry produces around 2500 metric tonnes of the metal.

Unlike economically sensitive commodities, to which it is frequently and incorrectly linked, gold does not get used up.

It is better to think of gold as a multi trillion dollar capital market asset.

In theory, all of it  is potentially for sale at any given time.

To speak of a rising gold price is technically incorrect.

What appears to be a rising metal price is an illusion that signifies the declining value of paper currency and, more
important, the wealth that it measures.

Gold per se does not excite the investment world. It has not suddenly changed its stripes.

What has changed is the world around it.

“In our opinion, the investment rationale for gold, in today’s circumstances, is deflation.

We believe the applicable model is a 1930’s style credit deflation.

Asset prices are pressured by deleveraging.

Uncertainty as to collateral values restricts credit despite available liquidity.

There is little government policy can do about this other than to devalue currency to lessen debt burdens.

The Fed understands this and is acting accordingly.

This is pretty much where things stand at the moment.

It remains to be seen whether massive stimulus can offset the headwinds of a negative credit cycle.

Since there is no way to know how these wild experiments in monetary and fiscal stimulus will turn out, investors are gravitating to gold, knowing that the integrity of the currency is the last thing on the minds of policy makers.

Free money is intended to inflate asset values in hopes of restarting the credit cycle.

In other words, our ‘leaders’ in Washington will solve the problem of too much debt with more debt.

Decades of credit excesses have brought us to the brink of a credit collapse.

Unfortunately, there is little to suggest introspection. Most expect and assume that government intervention will continue to work miracles.

Things should get really interesting for gold when government actions are seen to be impotent.

If currencies are successfully debased through inflation, gold will retain its value.

The middle ground between deflation and inflation exists only in the imagination of policy makers and analysts who still believe governments can create wealth.

Gold is a hedge against a world monetary order on its death bed.”

Dealers claim regional banks are stockpiling gold for clients who want their deposits saved in the yellow metal. 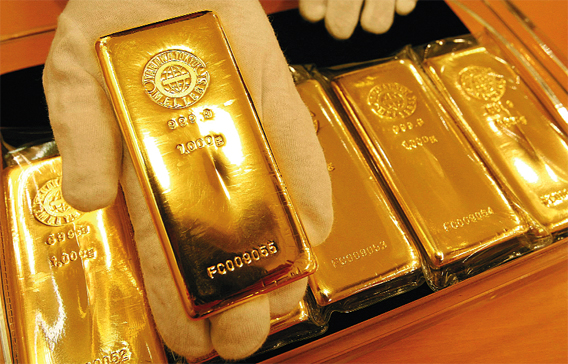 If it seems like I'm harping on this Gold thing, it's because I am.

keeps a nice set of charts offering a more sober viewpoint than you'll get from CNBC.

Here's the chart that makes me go all warm and fuzzy.

After yesterday's debacle it was the first thing I wanted to see this AM.

I have for a long time now read people who read Richard Russell.

He's well into his 80's now and his Dow Theory Letters

Still, the more I read him the more I wish I had been doing so all along.

"If I told you I was going to give you a large steel box for your kids,

and that box was not to be opened for fifty years,

would you rather I put three million in cash in that box,

or three million in diamonds or gold?"