Clarke and Dawe have been a staple of Australian television seemingly forever, and are rightfully considered by many Australians to be a national treasure.

They most always make me laugh, which makes me wish they were ours.

The Front Fell Off.

Reading on a Saturday Morning,

From Scientific American and Reuters July 13, 2010

Click anywhere below to get to this short, easy to read story.

Some marine life thrives on oil bubbling up naturally from the seabed even though it cannot cope with giant single leaks like from BP's ruptured well in the Gulf of Mexico, experts say.

Natural seeps from thousands of spots from the Pacific Ocean to the North Sea account for about 45 percent of all oil entering the oceans in a typical year, according to the U.S. National Academy of Sciences. The rest is from leaks caused by people.

The little-understood seeps show that the oceans can absorb what is normally viewed as harmful pollution -- a host of microbes can eat oil and gas, especially light compounds such as gasoline, while finding thicker tars indigestible.

First of all, thanks to Mike M. for sending this one in.

Second, when I see a piece like this presented so bitterly, I always wonder what lesson or message the presenter wants to convey.

I'm really angry and disgusted because:

Everybody is evil except me?

I'm way too smart to have let something like this happen to me, if the rest of you morons would only do what I tell you to do, this would have never happened?

So anyway, I went looking around for sites offering third party commentary along with this vid and found beau coup of the above, along with some having to do with the "shakedown" conversation along with "why the hell do we have a legal system anyway?"

I sent this video to my father who has 20 years experience in the Coast Guard and over 10 years experience as the CEO of an oil spill cooperative in California (firemen who are prepared to clean up spills when they occur).

Here is his response to me:

Thanks for sending the link.

A couple of things are different in this case.

This was the Mexican oil company that controlled and owned the lease, in Mexican waters.

They had about a mile of boom and there are thousands of miles of boom in use today in the gulf.

The dispersants used were basically oil solvents, and very toxic.

Most of the oil was burned or landed on mexican beaches.

The EPA stopped BP from burning the oil.

The US was requested to help in '79, but were limited to advisery roles only.

The warm waters of the gulf of Mexico result in quick evaporation and degradation of the oil, unlike the cold waters of Alaska

The methods attempted on this spill would have been effective on that spill if they had the technology in use today (robots, submersibles, modern muds and high pressure pumps.)

As far as the harm to fisheries, etc, the currents that rotate in the gulf from the atlantic ocean will disperse and dilute the long term effects.

In addition, the dispersants used will break the oil into very small droplets that degrade quickly and naturally, instead of being concentrated.

The news coverage is exaggerated in that the right wants to bloody OBAMA and the left wants to take over the oil companies.

People in between see it as the tragedy it is and want someone to say everything is going to be okay, but do not trust the Gov or the oil industry to tell them the truth.

As for me, I keep flashing back on Shirley Bassey and The Propellerheads.

Having sent this through to my faithful sidekick Garth, he came up with the following article:

put together a very good Google Earth interactive on the gulf oil spill. 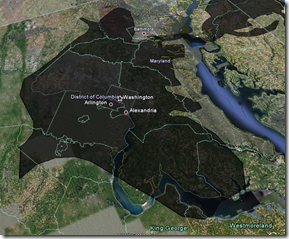 Thanks to Tony K. for sending this one in.