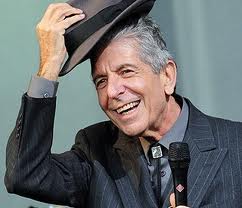 We had forgotten about this song until

Jesse posted this vid over at his fine site.

Many years ago Rich D. and I passed on a chance to see Leonard Cohen mostly because his music isn't all that danceable.

I came to regret that decision if only for this one song, which as I think about it, might not have been written yet.

So in retrospect, nothing is lost.

Anyway, this is Leonard Cohen on vocals, Bob Metzger on the peddle steel, Javier Mas playing the 12 string guitar, Charlie Webb on guitar, Mattie Webb on the harp, Sharon Robinson singing back up along with the Webb Sisters, Dino Soldo playing the keyboards among other things, Rosco Beck is playing the bass guitar, that's Rafael Gayol on the drums.

Everybody knows that the dice are loaded.  Everybody rolls with their fingers crossed.

Everybody knows the fight was fixed.  The poor stay poor, the rich get rich.

Thats how it goes.

Everybody got this broken feeling.  Like their father or their dog just died.

Everybody talking to their pockets.  Everybody wants a box of chocolates.

And a long stem rose,