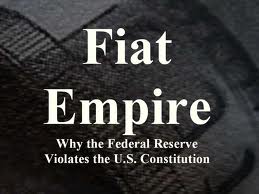 A month or so ago Zero Hedge

posted it's list of the top 15 "Economic Truth" documentaries.

We've been methodically grinding through them.

I think we'll probably post them all as so far I've liked every one of the eight I've sat through.

If you don't want to wait for me, hit the little gear above and watch them all back to back to back.

This Telly Award-winning documentary is inspired by The Creature from Jekyll Isalnd a book by G. Edward Griffin who explains the history of the Federal Reserve Act of 1912.

Also featured is Dr. Edwin Vieira, Ph.D., J.D. from Harvard whose discussion of the Fed includes the single simplest explanation of how the banks benefit from "The Federal Reserve System" at your expense ... at about 20 min ... that we have ever come across.

Mr Viera also discusses various long-term studies which indicate that the Federal Reserve System encourages war, destabilizes the economy, generates inflation (a hidden tax) and in general is THE THING ... you know ... in addition to your own self ... that is screwing you over.

Dr. Theodore Baehr completes the vid with a discussion of the relationship between the Media, the Fed and the Government and why you never see these issues discussed on network TV or in the mainstream media.

This stuff is not as dry as my explanation of it.

I have for a long time now read people who read Richard Russell.

He's well into his 80's now and his Dow Theory Letters

Still, the more I read him the more I wish I had been doing so all along.

"If I told you I was going to give you a large steel box for your kids,

and that box was not to be opened for fifty years,

would you rather I put three million in cash in that box,

or three million in diamonds or gold?"