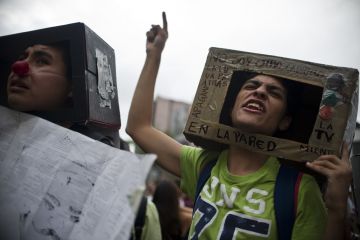 One would think that street protests the likes of which are seen below in the capital city of our next door neighbor would be considered newsworthy by the professionals running America's great news companies.

What's even more interesting is the relative silence from Mexican media giants of whom one would think it would be impossible to ignore such an outbreak of protest.

Protestors aren't protesting what they think to be a stolen election as much as they are protesting what appears to be purchased/biased media coverage by the Mexican media duopoly on behalf of the winner, President Elect Pena Nieto.

for a 2009 story from The Guardian concerning leaked memos expressing concern at the United States Embassy in Mexico City about bribes being paid to media companies and reporters/analysts either by or on behalf of Mr. Nieto and his candidacy.

here for the story of what is presently going on in Mexico City titled, "Mexico's Revolution Will Not Be Televised".

Can this even be possible?

The following vid is of what is a fairly routine occurrence, a Mexican television broadcast of a celebrity wedding.  In this case the weekend past wedding of comedian Eugenio Derbez y television actress Alessandra Rosaldo.

The chanting you here in the background is that of protestors outside the church shouting "Fraud".

Finally ... since somebody brought it up.

Before hip hop and whatever rap artist you might want to consider seminal, there was beat and the great Gil Scott Heron.  The following is a very nice treatment of his closest thing to a hit record.

The Revolution Will Not Be Televised.

It is our among our fondest dreams that Americans wake up one day and discover that the same parasitic vermin that own the banks, own the media and our government.