Chris Whalen and Uncle Roany each have a question. Actually Uncle Roany has four ... maybe five, I quit counting.

Although it is gonna take me a minute to get there.

Here's why the MF Global story matters to you.

Let's just suppose that you own one share of Apple and the caca having hit the fan, your brokerage firm goes upside down ... or boobs up, as my beloved partner used to say.

Here's the nasty suprise heading in your direction.

You don't really own that share of Apple as it has been purchased with your funds but is being held in your brokerage firm's name supposedly for your benefit.

What is even more interesting is that you have most likely given your brokerage firm permission to pledge that share of Apple as collateral for it's own purposes, be it trading or borrowing or whatever they might want it for when you signed that paperwork you didn't read.

Here's why the MF Global story double matters to you.

The customers of MF Global weren't trading stocks which were purchased in MF Global's name, they were holding segregated commodity accounts, US government treasuries and in some cases physical product most typically gold bars, all of which were held in their own name with MF Global being paid to provide secure housing.

This means that without specific authorization which it mostly never recieved, by law MF Global should not been able to pledge those assets for it's own purposes.

The law was ignored by MF Global but much more importantly, our government regulators who are supposedly in the employ of the victims of this crime actually abetted this theft in the following fashion:

Faced with the choice of the typical Chapter 7 liquidation for a commodities brokerage concern wherein customer assets are untouchable, the SEC deliberately approved the Chapter 11 reorganization of MF Global, the one of two bankcruptcy options that threw customers assets into the entire pot of stuff to be carved up among all of MF Global's creditors.

What's even more interesting is that the SEC did this secretly without contacting the Commodities Futures Trading Corporation which probably is the governmental entity that should have made this decision as it has handled most if not all previous commodity brokerage failures and had experienced people and proven systems in place that would have more likely protected customer accounts.

So to make a long story short federal regulators have abetted the theft of money from private citizens in favor of in this case ... as usual ... JP Morgan and Goldman Sachs, with the now addition of George Soros as the likely discount purchaser.

Not to beat a dead horse, but remembering the words of President Barack Obama. 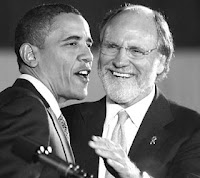 Now for Chris Whalen's question from

"So why is it that the Large Media have such trouble reporting this story? The fact seems to be that the political powers that be in Washington are protecting JPM CEO Jaime Dimon from a possible career ending kind of stumble with respect to MF Global. By stuffing the commodity customers of the broker dealer via an equity bankruptcy resolution supervised dutifully by SIPIC, JPM and Soros apparently get to benefit at the expense of the commodity customers of MF Global. This situation stinks to high heaven and everyone on the Street we've spoken to about the matter knows it. As the article below notes:

"Rather than being treated as a bankruptcy of a commodities brokerage firm under sub-chapter IV of the Chapter 7 bankruptcy law, MF Global was treated as an equities firm (sub-chapter III) for the purposes of its bankruptcy, and this is why the MF Global customer money in so-called segregated accounts "disappeared".

The effort by former New Jersey governor and MF Global CEO Jon Corzine to save his firm by stealing customer funds seems to warrant further discussion, yet instead we have silence. Here's a question: When is Corzine going to be indicted for securities fraud and other high crimes and misdemenors? The answer seemingly is that the Obama Justice Department is afraid to go there. Thus the fraud at MF Global continues and Washington does nothing to inconvenience the banksters as customer funds are expropriated.

But please, to our friends in the Big Media, could we stop saying that we don't know the location of the missing $1.6 billion of client funds from MF Global? The money is safe and sound at JPM and other counterparties. As with Goldman Sachs et al and American International Group, the banks have been bailed out at the cost of somebody else. And the various agencies of the federal government are complicit in the fraud."

Mr. Whalen's conclusion feels about right to us with regards to Fox and the Wall Street Journal who the other day "reported" that funds had "VAPORIZED".

But can you imagine The New York Times, MSNBC, CNN, CBS etc. ignoring this story in an election year with a Republican in the White House?

The following article referenced above is from

In recent testimony before a Congressional committee, MF Global’s former chief Jon Corzine as well as other MF Global executives said repeatedly the didn’t know where the failed brokerage firm’s $1.2 billion of missing client money was. In fact, MF Global executives knew exactly what happened to the money, as do the regulators who oversaw the firm’s bankruptcy. The so-called segregated customer funds were repeatedly, and legally (through re-hypothication), used as collateral for MF Global loans for 100:1 leveraged bets on European sovereign debt.

A substantial portion of MF Global’s commodity clients cleared their transactions through the Chicago Mercantile Exchange and Comex, owned by CME Group (ticker: CME). The question now looming over CME’s stock is whether the company will be liable for customer losses, as the Commodity Customer Coalition, a group that says it represents some 8,000 investors—including many hedge funds–with exposure to MF Global are not going down without a fight.

Rather than being treated as a bankruptcy of a commodities brokerage firm under sub-chapter IV of the Chapter 7 bankruptcy law, MF Global was treated as an equities firm (sub-chapter III) for the purposes of its bankruptcy, and this is why the MF Global customer money in so-called segregated accounts “disappeared”. In a brokerage firm bankruptcy, the customers get their money first, while in an equities firm bankruptcy, the customers are at the end of the line, meaning MF Global’s creditors, namely J.P. Morgan and other trading counterparties, got their money first, just as AIG’s CDS (credit default swap) counterparties (mainly Goldman Sachs) got their money first when the U.S. government bailed out AIG.

To add further insult to injury for MF Global clients, the firm reportedly unloaded hundreds of millions of dollars’ worth of securities to Goldman Sachs, and others, who then reportedly flipped these securities within a day to George Soros funds.

Ok so whose political party benefits when George Soros is flush with cash?

It all sort of comes together after a while don't it?