If you take a minute to understand how our money is created, the perversity and corruption in our system will become clear. And, when I say system, I mean our monetary system to be sure, but also our entire system of government as it functions today.

Most of our money starts out in life as debt. When the Federal Government of the United States of America decides that it needs money that it otherwise does not have, it issues debt ….. bonds.  Those bonds are sold at auction by the Treasury Department.  Much if not most all of these bonds are purchased by a group of twenty or so large, mostly Wall Street banks designated by The Federal Reserve Bank as "Primary Dealers".

Purchasing bonds from the "Primary Dealers" injects cash into the economy as the Federal Reserve simply makes a journal entry into it’s own computer system for it's own account, and in so doing it deposits a sum of money which did not exist one instant before and thus some number of billions of dollars of new money is born out of thin air.  It only dies when the Fed subsequently sells those bonds back into the economy, thus drawing cash out of the economy, or when the government pays that money back by redeeming it's previously issued bonds.  In other words, that money is for the most part immortal.

The Federal Government of the United States of America then pays the required interest on this debt out of tax revenue. 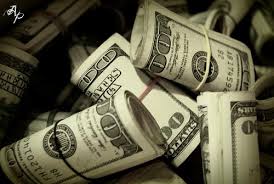 Lately the Federal Reserve Bank has on occasion been buying the bonds back from the "Primary Dealers" the very next day following their original purchase by the "Primary Dealers" from the Treasury Department.  This enables these preferred banks to buy the next batch of new bonds and then subsequently resell them to the Federal Reserve Bank at another profit whenever the Federal Government of the United States of America again decides that it needs to spend some money that it does not have.  Usually, that would be tomorrow.

This is the nuts and bolts of the proceedure commonly referred to as "Monetizing The Debt".

Here is where it gets real interesting ..... at least to me.  Congress is empowered by the Constitution to “coin” money without ever having to fool around with The Fed, issuing bonds, debt or making interest payments. U.S. Constitution - Article 1 Section 8 begins as follows: The Congress shall have Power To ….. some stuff you should probably take the time to read ….. Clause 5, “Coin Money, regulate the Value thereof” ….. and then some other stuff you should probably also take the time to read.  Congress punted on that right with the passage of The Federal Reserve Act of 1913, which Act created The Federal Reserve Bank as a privately held institution.

Were the Federal Government of the United States of America or any other nation in the world for that matter, to simply make it's own entry into it’s own account at it's own bank, rather than the privately owned institution that it now banks with, there would be no debt, no sale of bonds and no need to pay any subsequent interest payments out of tax receipts.

There most certainly would be instances of inflation, which would most certainly be underreported by a legion of governmental economists kept on the payroll, in one way or another, for purposes of massaging numbers in an effort to obscure the true rate of inflation in a cynical effort to evade accountability to the American people.  BUT ..... how is any of that different from what we have today?

The hidden benefit here is of course that there would be no insider profits to be had for the "Primary Dealers”.  Which profits they are presently using for the purchase of among other things, legislation that suits their own special interests, largely to the detriment of the American people.  That last part there is just my opinion.

Were we to simply cut out the middle man by chartering a bank that is wholly owned by the American people through the Federal Government of the United States of America and let it give birth to it's own money, a lot of our problems, most notably our debt, would become a whole lot more manageable.

Doesn't that strike you as an ever so much better approach?  It certainly worked for Andrew Jackson.