indicates that citizens around the world would strongly prefer to see Barack Obama re-elected as US President rather than his Republican challenger Mitt Romney.

The poll of 21,797 people, conducted by GlobeScan/PIPA between July 3 and September 3, 2012, indicates that Obama is preferred to Romney in 20 of the 21 countries polled. Overall, an average of 50 per cent would prefer to see Obama elected, compared to only 9 per cent who prefer Romney. The rest express no preference between the two.

Of all the countries polled, France is currently the most strongly pro-Obama, with 72 per cent wanting him to be re-elected and just 2 per cent preferring Romney. Australia (67%), Canada (66%), Nigeria (66%), and the UK (65%) are among the other countries with large majorities favouring Obama.

Pakistan, where 14 per cent want to see Romney elected compared to 11 per cent who prefer Obama, is the only country where the current President is not the favoured candidate--but here, three-quarters (75%) express no opinion. The countries with the largest proportions favouring Mitt Romney are Kenya (18%) and Poland (16%). 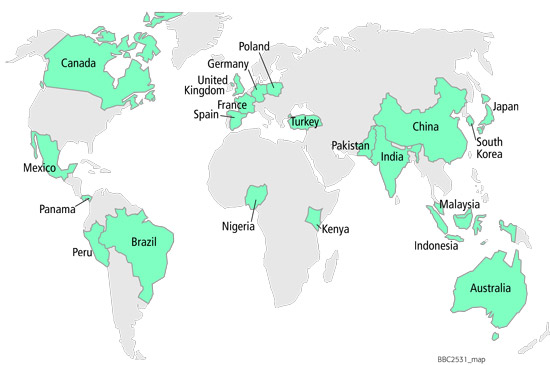 Which may just be one of the very few real good reasons to prefer Mitt Romney over Barack Obama.